"Bet you killed a lot of Thrall to weave that thing. I didn't even know they had skin."
— Omar Agah[1]

Omar Agah was a Hunter that was part of the First Crota Fireteam led by Eriana-3 to confront Crota. He was partnered with the Ghost Karsys.

"Toland cracked the rune, or led us to believe he did. I told him it was either that, or the Hive have a hell of a recipe for beer."
— Omar Agah[2]

[3] Omar was asked by Eriana-3 to join their mission to destroy the Hive god Crota, Son of Oryx, alongside the Warlock Toland, the Shattered, the Hunters Sai Mota and Eris Morn, and the Titan Vell Tarlowe.[4] At first he was doubtful of the idea, believing Eriana's grief over Wei Ning was making her act irrationally, but upon finding out she had been sent by Eris, he agreed to join them instantly.[5] Omar remained skeptical about the mission, though, his motivation of taking part in the raid being his anger and the wish to avenge all who had been lost in The Great Disaster.[6] He would later admit it had been Eris' optimism that gave him hope, seeing that she truly believed in the strength they had as an united fireteam.[7] He also doubted Toland's loyalty, something they discussed with Vell, but the Titan affirmed he put faith merely in Toland's knowledge and that alone, as he did not trust his weapons but used them.[8]

The fireteam landed on the Moon and began heading for the entrance to the Temple of Crota while inquiring Toland about the exalted Hive warriors they would be facing. Omar questioned what made the Blades of Crota so special, and Toland called them world-carvers whose swords had a dark edge and purpose. Omar reflected that their swords had cut down more Guardians than he could count during The Great Disaster and wondered if they were prepared to face the Hive alone. Vell claimed he was prepared, but Omar noted that did not answer his question. When Eriana and Vell both expressed interest in wielding the Hive's own swords against them and Vell thought they would be lucky to do so, Omar told him his ideas about luck were strange. Toland told Omar that he might think differently if he was forced to wield one for himself.[9] They then discussed Sardon, Fist of Crota, and Vell declared that the Hive general sounded like his kind of fight, causing Omar to question if there was a fight the Titan would not enjoy.[10] Before they descended into the Pit, Omar offered to make Eris a talisman for good luck, but she refused, thinking it to be but a superstition. Despite that, Omar still created a brace of knives and hid it somewhere in the Hellmouth for Eris to find, probably when he was sure the fireteam was already doomed.[11] 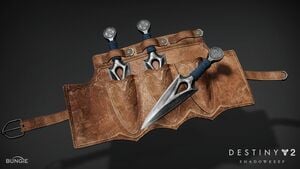 "If they know our every move, what chance do we have?"
— Omar, despairing in the mission to destroy Crota

After entering the Temple of Crota the fireteam heard screams from deep within the Hive tunnels. When the screams began again, Eris pointed them out, and Omar sarcastically claimed that he had just started to tune them out. Toland explained the screams came from Omnigul, Will of Crota, who was announcing the birth of new Hive spawn that served Crota. As the mad Warlock continued to ramble about the screams, Omar commented that he was on a roll, but he did reveal that killing Omnigul would end Crota's threat in the physical world, causing the fireteam to follow the screams deeper in the tunnels.[12] As they hunted for Omnigul, the fireteam suffered their first casualty when Vell was overwhelmed by a swarm of Thrall that drained his Light.[13]

After Vell's death the fireteam was split up, with Omar, Eris, and Toland becoming separated from Eriana and Sai. When Eris commented that she could feel something watching them, Omar commented that he hated when she said stuff like that. Toland revealed that their watchers were the Eyes of Crota, and Omar wondered how they could succeed if they were constantly being watched. Toland informed him that he was sure the Hive had led them there on purpose and that they would be used as sacrifices by giving their draining Light to Crota. Omar declared the old Warlock to be mad, but Toland merely agreed he might be right before directing Omar and Eris to hunt the Eyes, kill them, and they could then following their draining Light to Crota.[3]

"It's a funny thing, dying for good twice. I imagine my first death was frightening. But this one was calming. This time I knew I wasn't really gone forever. Neither were my friends. Vell. Eriana. Sai. Toland. …Eris. There was peace in that. Knowing we'd always be together, somewhere. Somehow."
— Omar Agah[14]

During another encounter against the Hive, Omar was badly wounded and captured by the Heart of Crota and believed by Eris to be dead. The Wizard brought him deep into the Hive's tunnels to a chamber holding thousands of cocoons and freshly born Hive and held the broken Guardian in a vice of bone and pain, at which point she began to use Hive magic to peel his Light away. The Hive made his Ghost Karsys watch Omar's suffering, then killed it in front of him.[15] Screaming in agony, Omar's pain and Light were used by the Heart of Crota to feed the newly born Hive creatures, and his screams drew Eris to the chamber, where she witnessed his demise.[16] Although considering stepping up to help her friend, Eris decided not to act, out of fear they would both perish - something she later felt tremendous guilt about.[11] Omar did not blame her, though,[17] and found comfort in seeing a familiar face in his last moments; moreover, he noticed she was holding a trinket Omar had made her and she had rejected, and it made him feel less alone.[18] The fire in his heart stoked by her gesture, Omar was overcome with calmness and clarity, and believed neither him nor his fireteam members would truly be gone forever. In his last moments, he felt the peace of knowing him and his friends--even Toland--would somehow always be together.[14] 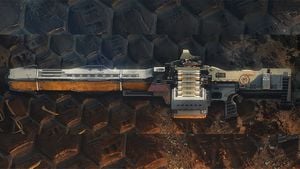 "There was only darkness… until there was Light. Again. A third time."
— Omar Agah

Years after his original death, Omar Agah reawakened in the Light's presence, having learned that a mishap in the Heart's ritual had extracted not only his Light, but his very soul - causing him to have been transferred into the body of an insect-like creature.[19] The Guardian began receiving messages from him, signed "A loyal friend", and prompting them to go for a quest to find the lost Lightbearer.[6] He was eventually recovered from The Pit and brought to Eris, who recognised her old friend and infused his new form into the frame of his prized machine gun to create the Xenophage.[20]