"Again I will confess. I am Eriana-3, of the Praxic Fire, and I know my flame goes out down here. I will burn bright and hot and raze a thousand Hive to ash as I go, but I know we will not end him – The one who fell you, and hundreds more, with that foul blade."
— Eriana

Eriana-3 was an Exo Warlock and a member of the Praxic Warlocks. She fought in The Great Disaster and was the leader of the fireteam that sought to assassinate Crota, Son of Oryx. She was partnered with the Ghost Jax and wielded the unique hand cannon Eriana's Vow.

"But that night—because it was you—I knew then and there that I never wanted to be without you."
— Eriana-3, on her first meeting with Wei Ning

At the Tower saloon, Eriana was introduced to Wei Ning by Pahanin, who soon began questioning Eriana extensively about Stormtrances. Although she normally would have been annoyed by such questions, Eriana quickly became enamored with Wei Ning and knew instantly that she never wanted to be without her.[1] After working together for awhile, Eriana presented a bag to Wei Ning that contained a new mark made out of one of Eriana's robes that she made after noticing that Wei Ning's mark had begun looking ragged. Wei Ning noted it was soft and asked if this was Eriana's way of getting her to dress up, although she quickly noticed Eriana's silence and stated she was just kidding. Eriana then asked Wei Ning to join her fireteam, and the Titan told her that she did not even have to ask and that she would follow her to the end of the galaxy.[2]

"My name is Eriana-3, disciple of the Praxic Warlocks, marked by the Cormorant Seal. We came here under one banner, united in a host of thousands, to claim the Moon. But the battle goes against us. I have taken a prisoner and this is the record of its interrogation. If I transgress in your eyes I ask for your forgiveness."
— Eriana-3

Eriana and Wei Ning were among the thousands of Guardians who launched an assault against the Hive forces entrenched on the Moon. During the battle, Eriana and several other Guardians took a Hive Wizard prisoner, torturing it with Light and recording the interrogation for future study. She learned of the name, Crota, and saw through the Wizard's mind as the Hive God Prince killed Wei Ning. She sought information on how to kill Crota from the Wizard, and was telepathically shown images of Crota's realm and the Oversoul, but another Guardian informed her that Crota was operating on the Mare Imbrium front, carving his way through the Guardians. As Eriana pressed for the means to reach Crota's realm and kill him, the Wizard mocked her, showing how it had tortured an Awoken man in the exact same way Eriana was interrogating it and claimed they were the same before dying. Eriana ordered the Wizard's body be incinerated and their Sparrows be summoned so they could join the battle, hoping that their Light would be enough to turn the tide. However, the Guardians soon abandoned the battle and fled back to Earth, with the failed campaign becoming known as "the Great Disaster".[3]

In the aftermath of the battle, Eriana returned to the saloon where she had met Wei Ning and proceeded to drown her grief in alcohol, as the saloon was offering free drinks after the tragic losses the City had taken. She was eventually approached by Eris and was happy that her friend had survived the battle. Eriana mournfully recounted how she had met Wei Ning there and bitterly lamented that it was far too quiet now without her laughter. She began to yell at the other patrons, begging for someone to laugh and fill the grieving silence. After falling silent herself, Eriana told Eris that she missed Wei Ning so much, and her friend sympathized with her plight.[4]

"I was a fool to lead us here. I was blinded by the loss of so much, by your light extinguished. I put my trust, and the light of four others, in a madman, and I bear witness to their fall into darkness and death. Toland's song was nothing but screams, and we go now to sing with them. We will not return."
— Eriana-3, in her last recorded message before her death

Eriana soon replaced her grief with a consuming desire to gain vengeance for Wei Ning and so devoted herself to Crota's destruction.[5] She worked together with the Hunter Eris Morn in order to solve Crota's apparent immortality. Without a ready solution, they sought out knowledge from forbidden Hive arcana, in the form of the exiled Warlock Toland, the Shattered. Toland described the method in which they could defeat their foe by entering the Ascendant Realm and slaying the Hive Prince in his throne world. Although Eriana was disturbed by the mad Warlock's obsession with learning Hive secrets and their secret song about death, she and Eris recruited him to join their mission.[6]

They also asked three other Guardians, Omar Agah, Sai Mota, and Vell Tarlowe, to aid them in their quest to defeat Crota. While Sai was easy to convince[7] and Vell sought them out to volunteer for the mission,[8] Omar had significant doubts about their chances of success and questioned if she was truly serious. He apologized after stating that dying on the Moon would not bring back Wei Ning, but Eriana told him she valued his honesty and stated she intended to be honest in return. She declared the Vanguard too cowardly to do what needed to be done and that the walls of the City would not save them if Crota invaded Earth. When Omar protested that surely they could defeat Crota in the City, Eriana explained it would not be that easy and that she and Eris had gone to Toland. Hearing Eris name, Omar informed Eriana that she should have led with the fact she was involved and immediately agreed to join.[9] Before the fireteam departed from the Tower, Eriana recorded a message explaining their goal to the rest of the Vanguard should they fail.[6] As Eriana and her fireteam flew to the Moon aboard the Jumpship Eriana's Vengeance, Eriana wrote a message to Wei Ning. Fearing that their relationship would only be remembered as a tragedy, she chose to focus on the happy times that she had with Wei, reflecting back on their first meeting at the Tower's saloon.[1]

After they landed on the Moon and began making their way to the entrance of the Temple of Crota, Eriana and the others questioned Toland about the threats they would face. As they discussed the Blades of Crota, Eriana disagreed when Vell stated they were more than just Knights, and was insulted when he said that calling them just Knights would be like calling her a tin can. Toland agreed with Vell, stating there was a dark purpose to the edge of the Blades swords, and Eriana questioned if it was darker than death, causing Toland to claim death would be like peace compared to the shadows the blades cast, The team discussed the thousands of Guardians cut down by the Blades, and Eriana bitterly reflected that the Vanguard should have known better than to assault the Hive fortresses. When Eris worried that Light would not be enough to stop the Hive, Eriana told her that they would simply take their blades and cut them down one-by-one if needed. Eris asked if she would truly use a weapon of Darkness, and Eriana stated that she would do anything to avenge the Guardians killed by the Hive, although she had to stop herself from revealing she only wished to avenge Wei Ning's death.[5] They then discussed Sardon, Fist of Crota, who was one of Crota's leading generals. When Vell stated that he had faith in their Light and his to stop the Fist, Eriana told him that their mission was not about faith but vengeance.[10]

As they descended into the Temple and fought through heavy Hive resistance, they heard screams from deeper into the Hive's warrens. Toland identified them as the cries of Omnigul, Will of Crota, and that the announced the birth of new Hive spawn and issued orders to the Hive. Eriana commented that she heard those screams even when they were not there, and wished she could tear the throat of Omnigul out. Toland commented that their mission would be close to successful if she did, as it would end Crota's threat in the physical world. The fireteam decided to pursue the screams to find and eliminate Omnigul.[11] However, the fireteam soon suffered their first casualty when Vell underestimated a group of Thrall and became overwhelmed by their ability to smother his Light.[12]

Following Vell's death, Eriana and Sai were separated from Eris, Toland, and Omar. Exhausted and injured by their fights against the Hive, their own Light was being rapidly drained. Eriana was unable to find tracks to find their companions, and asked her Ghost, Jax, for an update. She told Eriana that its Light was being drained quickly, and that Sai's Ghost Yuka was still functional for the moment but damaged beyond repair and that they had no chance to transmat out or send a message. Eriana ordered her to transmit one anyway, and she began to explain their current situation and how they had slaughtered untold numbers of Hive to get there. In the distance they heard Omnigul's screams, and Eriana stated that they were following the Hand of Crota. Sai told her the Hand was falling back towards Omnigul's tunnels, causing Eriana to end the message and ask Sai if she was ready. The Hunter claimed her knives were ready for another dance, and Eriana told her friend that she spoke little but always said the right things.[13] 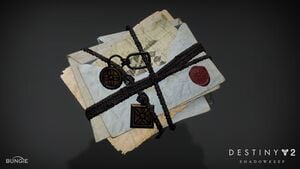 Eriana and Wei's letters the Guardian finds for Eris.

Eriana and Sai failed to kill Omnigul or the Hand, and Sai was killed attempting to escape from Crota's Will. Eriana was left alone, badly hurt and drained of Light. She managed to make it through The Stills and reached the entrance to the Oversoul Throne, but doing so cost Jax any chance of being able to resurrect her. Knowing that she would die in her attempt to slay Crota, she recorded one final message for her lost love Wei Ning and requested for Jax to take it to the spot where the Titan perished. She begged for Wei Ning's forgiveness for failing to kill Crota and leading her friends to their deaths, and bitterly regretted having trusted Toland's knowledge to help them survive their mission. She hoped that their fall would serve as a warning to others who might think to kill Crota, and wished that they would simply stay on Earth to defend the Last City rather than throw their lives away.[14] Eriana then entered the Oversoul Throne, where her Light shined brightly before being snuffed out by[15] the Deathsong of Ir Yût, the Deathsinger.[4]