"My knives are eager for another dance."
— Sai Mota[1]

Sai Mota was a Bladedancer Hunter who joined the Fireteam Eriana-3 and Eris Morn led against Crota. She was partnered with the Ghost Yuka.

During her career as a Guardian, Sai befriended her fellow Hunter Eris Morn. She taught Eris how to carve beads with a knife and crafted a necklace of feathers and beads.[2]

"Toland, stop recording this. Fine, fine. Whatever. A toast, then! To the best damned fireteam I've ever worked with. We may not be the smartest. And we may not be the bravest. But we are the dumbest! To victory!"
— Sai Mota, on the night before they set off for their quest[3]

In the aftermath of The Great Disaster, Sai was approached by Eris and Eriana-3 to join them in their mission to kill the Hive god Crota in the tunnels beneath the surface of the moon. Sai questioned if they really intended to trust Toland, the Shattered, who was well-known for being a mad exile from The Last City, in leading a fireteam into a interdicted zone where thousands of their fellow Guardians perished all in the name of getting revenge on a god. When they confirmed that was the case, Sai happily agreed to join their team,[4] asking only that she be avenged should she perish during the mission.[2] Sai, Eris, Eriana, and Toland were joined by Omar Agah and Vell Tarlowe to round out the rest of the fireteam.[5] On the night before the Fireteam went into the Hellmouth, Sai proposed a toast to the group, calling them the best and dumbest team she had ever worked with.[3]

After the Fireteam infiltrated the Hive warrens, they encountered heavy resistance. They heard screams throughout the tunnel, which Toland claimed signified the birth of new spawn born in the name of Crota. He identified the screams as coming from Omnigul, and Sai began to question how he knew that before deciding she did not want the answer.[6] Eventually, the group was split up, with Eriana-3 and Sai in one group, and Toland, Omar and Eris in the other. Sai and Eriana pursued the Hand of Crota, but their Ghosts were damaged and their Light was fading. With their communications with the others and Earth cut off, they decided to continue their assault, despite the Hand falling back to a tunnel from which they could hear Omnigul screaming. Sai remarked that her knives were ready to kill more Hive, and Eriana told her she spoke little but always said the right things.[1] They failed to killed the Hand, and Sai attempted to flee, losing her knives in the process. She was close to escaping the Hive, using torn Acolyte bones as replacements for her daggers, before Omnigul ultimately tracked her down.[7] The Hive Wizard killed the Hunter forty-three times before wormrot set in and robbed Sai of what Light remained in her.[4] Sai remained brave and laughed in the face of Omnigul as she died her final death.[8] Yuka refused to abandon Sai after her demise, and remained by her bones for the Hive to devour her Light in turn.[4] 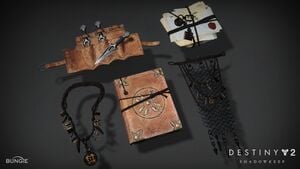 "I'll remember the Light. Will it remember me?"
— Sai Mota

When Omnigul was eventually killed by The Guardian, Eris Morn hoped that Sai Mota's Light would finally be at rest.[9]

When Eris returned to the Hellmouth investigating the Hive on a secret mission, she inadvertently triggered the Pyramid. This caused phantoms and Nightmares to begin haunting the solar system, including a ghostly manifestation of Sai that haunted Eris. This phantom was eventually joined by other nightmares of the ill-fated fireteam that whisper accusations and attempted to manipulate Eris. While struggling to ignore its whispers at first, Eris soon began to succumb to her own guilt of failing them. The Guardian presented Eris with a memento necklace handmade by Sai herself, which they had found and restored much to Eris' surprise and relief. Having now made peace with Sai's passing, the phantom impersonating her disappeared, and Eris considered taking up carving again in memory of her dead friend.[2] After finishing this quest, Eris can be seen wearing Sai's necklace.

"Sai descended into these depths with an unequaled compassion for those around her. That's the type of thing that gets you killed. If you ask me, Sai desired the respect of her fireteam. She died not realizing she had it all along."
— Toland, the Shattered[10]

Sai was a quiet individual and spoke very little. However, when giving toasts no one could silence her.[2] In one of his patrols on the Moon, Toland describes her as having been full of compassion for those around her, and argues such a trait gets one killed. He speculates Sai desired the respect of her fireteam, and died not realising she had it all along.[10]