From Destinypedia, the Destiny wiki
(Redirected from City)
Jump to: navigation, search 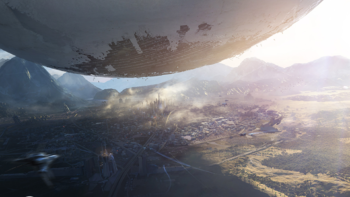 The Last City, in the shadow of the Traveler

"From across the ruined earth they came, seeking shelter from the storm."
— Grimoire description

The Last City, also known as The Last Safe City,[1] is the final bastion of humanity. Located somewhere on Earth, the City was built and is located directly under the floating Traveler to take advantage of its protective shields.[2][3] The City was slowly built after the Collapse[4], marking the end of the Dark Age and the beginning of the City Age; most of humanity's survivors now live in the City as opposed to hidden enclaves throughout Earth.[5] Countless wars were fought to keep the peace, and from this era of strife rose the Guardians.[6] Surrounding it is a massive wall built by the first Titans to assist in keeping out enemies. The Tower formerly rested along the wall, which was the headquarters for the Guardians.[4] They have defended the City for centuries, but this defense did not last indefinitely, as demonstrated by Dominus Ghaul's invasion.[7] The City was occupied by Ghaul and his Red Legion following the onset of the Red War, but was liberated after a counteroffensive led by the Vanguard.

The City is inhabited by humans, Awoken and Exos, who worked together in the time following the Golden Age to build the city and its defenses.[2] The City was once embroiled by a bitter war between the different factions of the City, until the Guardians stepped in and put a stop to the violence. Since then, it was ruled by a Consensus of the factions, with the Speaker as its head and the Vanguard taking on an advisory role.[8]

During the Red War, the Red Legion's occupation of the City disrupted its governance. Although the Vanguard and Consensus survived, the Speaker is presumed dead following the City's liberation, and it is unclear who, if anyone will fill his role.

"The City is the last populated city on Earth and the last bastion for mankind and civilization. The City was built long after The Traveler gave it's life to push back the Darkness, a small settlement slowly began to build where the Traveler hovers, where it slumbers. Mankind came together to build The City underneath the Traveler because it provide protection from the horde of the darkness."
— Website description

For a long time after the Collapse, humanity had been divided into various petty fiefdoms, with Guardians blessed with the Traveler's Light becoming petty kings or bandits that preyed on the weak. However, following the foundation of the Iron Lords, humanity began to unite. Underneath the Traveler, with the guidance of the first Speaker, the Last City began to take root. It started as a small number of tents, but as more Guardians and humans began to arrive in the area, the City began to grow, the tents turning into fully-fledged buildings and exploding in size as population increased. Even throughout various alien attacks such as Fallen raids, the City grew, until it reached its maximum extent and the Guardians, including Zavala, Ikora Rey, and Shaxx helped to build the city's walls.

At some point during the City's existence, the various factions and groups in the city fought one another for dominance in a conflict that nearly tore the city apart. However, the conflict was ended when the Guardians stepped in and put an end to the fighting. The end of the Faction Wars saw the creation of the current City government, with the civilian Consensus, the Guardian Vanguard, and the Speaker serving as the city's leaders.

Besides the Faction Wars, the City had been involved in two major battles. The first was the Battle of Six Fronts, when four orders of Titans had to defend the walls against six enemy approaches. The second and far more devastating one, was the Battle of Twilight Gap. The full might of the Fallen Houses descended upon the City as countless Guardians fell, but were eventually routed from the City.[5]

In the recent years, the City began to reach out, to fight back the hordes of the Darkness, striking back against the alien invaders. They engaged in a war of resistance with Oryx, the Taken King and his Taken army, a conflict that would be called the Taken War. Fortunately, the Guardians were able to push Oryx and his Taken back, culminating in a raid that breached Oryx's Ascendant Realm on the Dreadnaught. The raid ended with the deaths of Oryx's most powerful servants and the Taken King himself. However, the war wouldn't end, even with the deaths of various pretenders who sought Oryx's vacant throne, but would have to continue fighting the lingering Hive and Taken in the System.[9]

The Last City and the Vanguard didn't take an active role during the SIVA Crisis with the radical Devil Splicers in the Plaguelands as the conflict was handled by Lord Saladin, Shiro-4, and the Guardians who became the next generation of Iron Lords. They were, however, at least aware of the conflict but didn't take immediate action unless it reached the outskirts of their territory. Forces of the City did aid the Guardians when they discovered a Fallen plot that would destroy the Bannerfall tower and leave the City vulnerable. With the City's help, the Guardian was able to drive out the Fallen, thereby securing the tower and by extension, the entire city's Wall.[10]

The Vanguard began to take a more active role during the SIVA Crisis when old adversaries began to reappear, such as Taniks, Omnigul and Sekrion, Subverted Mind. Overseen by Ikora Rey and "supported" by Cayde-6, the Guardians were able to destroy Taniks Perfected after he was resurrected by the Devil Splicers using SIVA. Later, the Guardians were able to prevent the remaining Taken from controlling the repaired Vex Nexus Mind and slaying Omnigul before she could resume her purpose in serving her dead masters.[11][12]

Two years after the Taken War, the Cabal Empire's Red Legion launched a major invasion of Earth headed by the Red Legion commander and emperor of the Cabal Empire, Dominus Ghaul. The Red Legion launched a devastating surprise attack on the Last City. This attack would completely devastate Earth's last bastion and the tower, being the most devastating offensive ever launched against the Guardians. The attack left Guardians cut off from the Light and severely crippled. Many inhabitants of the City were killed in the invasion. Following the invasion, Red Legion forces began occupying the city. [13][14]

Several weeks after the Red Legion's occupation of the City, a Vanguard counter-offensive led by Commander Zavala, Cayde-6, and Ikora Rey liberated the city. During the occupation, The Speaker was killed and the Traveler subjected to a massive cage which constricted its power and allowed the Commander of the Legion, Dominus Ghaul, to extract and use its Light for himself. However, during the battle to liberate the City, Ghaul was killed and the stolen light reclaimed by the Traveler, which had awoken for the first time since the Collapse. The Tower was destroyed in the battle, and the Vanguard as well as many other vendors were forced to relocate until the old Tower could be renovated. The Vanguard continued to authorize and direct Strikes against priority targets from their new position.[15]

During the events of Black Armory, the city was breached by the Kell's Scourge, a brand new, anarchist faction of Fallen terrorists who sought to steal and harness Black Armory technology to rise against all Fallen orders. Their attack was the largest Fallen offensive on the city since the Battle of the Twilight Gap, and required a full team of six Guardians to raid their lair. The attack was neutralized when the Guardians confronted the source of the attack, Insurrection Prime, Kell's Scourge, who battled the Guardians with a massive war-mech, eventually being brought down by the combined efforts of the Guardian raid team.

The City is divided into several districts, not all of which are known. Shuttles periodically transport passengers between the City's districts and the Tower.[16]

After Twilight Gap, the districts nearest the City walls were abandoned.[18] Many districts were also entirely obliterated by the Red Legion's invasion and occupation of the City. To replace them following the City's liberation, blueprints with modular designs for housing and storefronts were drawn up by City engineers.[19]