Insurrection Prime, Kell's Scourge was the Prime Servitor rebuilt into an immense war machine by the Kell's Scourge, and was the final boss of the Scourge of the Past Raid.

Insurrection Prime was the first war machine of its kind, introduced by Siviks, Lost to None. It served as a living embodiment of the Scourge's ideology to tear down old Fallen traditions, and establish a new age amongst their species through anarchy and hellfire. It was one of the most powerful Fallen combatants ever encountered by Guardians, armed with the power to destroy the Last City with its destructive capabilities.

Before losing the Gofannon Forge on Nessus to the Guardians, the Kell's Scourge had infiltrated their forces into the Botza District of the Last City, uncovering the Black Armory Vault hidden within after it was lost during the Red War. After the Scourge plundered it of its advanced weaponry, they took an interest to create a new type of war machine; repurposing the Vault's phase radiance technology to create Insurrection Prime using the hull of a Fallen Walker and piloted by a Prime Servitor housed within its chassis. In response, Ada-1 dispatched a fireteam of Guardians to secure the Vault back from the Fallen.

The Guardians quickly eliminated the Defender Servitors guarding the Prime and destroyed the rigs protecting it with Phase Radiance-enhanced Drake Tanks, prompting the mech to deploy and engage them. Aided by Berserkers, Insurrection Prime roamed the wreckage of the Botza District to repel the Guardians, threatening to annihilate the whole City with its destructive armaments. It was quickly outwitted however when the team disabled its shielding and kept it staggered with a Drake Tank. The Guardians unleashed significant damage to the mech's exposed Servitor core, only for the Prime to retaliate by tethering them with different Phase Radiances. In a final stand, the fireteam pooled their respective radiances together to destroy the war machine once and for all.

The remains of Insurrection Prime were never cleared from the Botza District. When the House of Light was granted the district as the Eliksni Quarter, its wreck laid broken inside their walls, where Eido, Daughter of Misraaks, spoke of the Kell's Scourge as a cautionary tale about people who would take advantage of others' desperation. 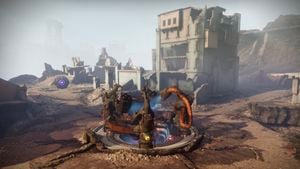 Insurrection Prime being upgraded with Phase Radiance, guarded by a single Insurrection Defender.

When the fireteam exited the Botza Underground and proceeded into the combat area, they encountered a massive Insurrection Defender Servitor. They needed leave it alive for now and split into two teams of three: a bottom team and a surface team.

The team at the surface had a simple task: kill the Brutal Shanks with elemental Absorption shields before they entered the bottom area, as well as the Insurrection Defender Servitor when the bottom team calls it out. Multi-element weapons were recommended for this role, preferably Hard Light or Borealis to quickly deal with the elemental shields of the Shanks.

The bottom team had to run into the holes located in the four corners of the inner house structures and enter the tunnel underneath as soon as the Servitor was killed. Four different terminals that can be punched could have been found down there, all sporting a different symbol and color: Triangle (blue), which gave the Angular Phase Radiance, Square (white) which gave the Parallel Phase Radiance, and Circle (pink), which gave the Continuous Phase Radiance. The fourth terminal pulsated in red and flickered between all three previously mentioned shapes; hitting this terminal triggered a wipe mechanic.

After each player in the underground area had acquired a different buff, they called it out to the top team who would then kill the Insurrection Defender and reset the terminals. The bottom team needed to once again find the same shape to punch; picking a different one would've killed the player. Keep in mind that having a buff active created a force field around the player which tethered and damaged Guardians with other buffs stepping into it. The most effective way to avoid this was to rotate clockwise until everyone had found their respective terminal.

After everyone had gathered their second set of Phase Radiance, the top team had to kill the Servitor to deactivate the electrical fields covering the exits. The bottom team would have to split up and head to the three different energy stations identical to those in the first encounter. These were placed in the bottom left, bottom right and top middle of the area and spawned a Powered Drake Tank when two Phase Radiance charges were deposited. The bottom team needed take these to middle and shoot the Insurrection Prime, preferably using the mini missiles to deal the most effective damage. The tanks had a 30 second timer and exploded once it ran out. The entire process repeated until the health bar was fully depleted and the second phase starts. 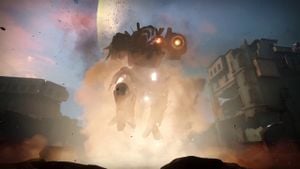 The second phase expanded upon the mechanics of the first encounter. The fireteam would split into three teams: runner team, runner team 2 and map team. Before the encounter could be started, a Radiant Battery from a Berserker needed to be dunked in the console next to the entrance. The Insurrection Prime would then enter the arena and hammer the fireteam with several dangerous abilities. There were several shield plates that need to be destroyed on its body: two on the knees, one on the right shoulder, two on the back and one under the left arm. The team that was not running with Batteries focused on taking down these as well as Fallen Vandals located on the rooftops.

A map similar to the one from the first encounter appeared in front of the entrance. The players once again had to locate the right Berserker and place the Batteries in the right places based on the callouts from the person monitoring the map. While this is going on, the Insurrection Prime walked around in the middle, bombarding everyone within reach with rapid-fire Arc blasts. It also had multiple stronger abilities that it will occasionally use throughout the battle:

The first one was a volley of missiles launched into the air identical to those used by Elykris, the Machinist that tracked the location of the nearest player.

The second one was a cannon that shot powerful Void blasts in rapid succession, much like the ones fired by Servitors.

The third one was a charged explosive shot similarly to the one on Spider Tanks. This attack dealt massive damage to players and could potentially have one-shot a Guardian at lower Power Levels. 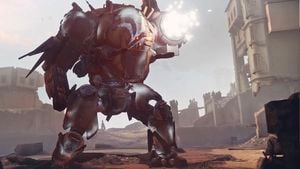 When any of these attacks were being used, an orange-red tank would appear somewhere on its back. Breaking this staggered the Insurrection Prime, cancelling the attack and giving the fireteam more time to reach the damage phase.

After four Radiant Batteries had been successfully placed, a Drake Tank spawned at all the tank plates around the area. One player needed to grab a tank and shoot the Insurrection Prime once to start the damage phase. The mech would kneel and the Servitor would reveal itself and its critical spot. Standing at the very back with Whisper of the Worm or D.A.R.C.I. was recommended for maximum DPS.

After a couple of seconds, the Servitor would send out an EMP blast that gives all Guardians a random debuff: Continuous, Parallel or Angular Phase Radiance. Standing together with a player with a different debuff created a tether between them and causes damage over time, while standing together with someone with the same debuff tripled the damage output. The most efficient way to utilize this was to create a triangle with three spots: C, P and A, with C to the left, P to the right and A in the back and having people switch as their debuffs changed throughout the damage phase.

After around 30 seconds, the front of the mech closed and the entire encounter started over again until the Insurrection Prime is dead, thus marking the end of the Raid. If four damage phases passed and the Prime was still alive, it Enraged and wipe the fireteam.