"Hear me, o dreadful worm. We will raise an army. We will die and be reborn in your name, feed you the souls of our enemies."
"State your claim."
"We take Mars. "
— Nokris to Xol

Nokris, Supplicant to Savathûn, previously known as Nokris, Herald of Xol, is a Hive God[1][2], the estranged second son of Oryx, the Taken King[3] and the former herald of the Worm God, Xol, Will of the Thousands. Exiled by Oryx for his heresies, Nokris later traveled to Mars and was imprisoned in the polar ice by the Warmind Rasputin. [4] Following Xol abandoning Nokris in favor of the Guardians, the former herald pledged his allegiance to his aunt Savathûn, the Witch-Queen in a bid to end the Hive's reliance on the Worms and the Darkness. He served as the final antagonist of the Season of Arrivals, working for Savathûn to subvert the Witness's messages until he met his potential end by the Guardians.

"You seek power? I will give you power beyond measure. The power of life renewed."
— Xol to Nokris[5] 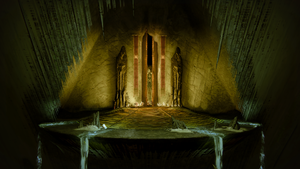 Statue of Nokris (left) in the Altar of Oryx

Brother of Crota, Nokris was disfavored by his father for his physical weakness. To make up for that weakness, Nokris instead honed his mind, learning magic and hoarding knowledge and stories as a different form of Sword Logic to feed his Worm. He devised a plan to prove himself to Oryx by communing with the Worm Gods as he once did; however, while he succeeded, most of the worms rejected the disfavored son. Only Xol, Will of the Thousands remained to grant him an audience. Fearing an attack from Yul, the Honest Worm, Xol made a pact with the forgotten child. Nokris traded his heart for some of Xol's power and the secret of necromancy. [6][5][3]

Oryx soon learned about his son's activities and was furious. Nokris's actions were sacrilege, and necromancy was considered a heretical violation of the Sword Logic, for it disrupts the means of survival of the fittest. For his crimes, the King of the Hive exiled him and removed all references of his disowned son from the World's Grave and the Books of Sorrow.[7][1] Only a statue remained.

Nokris was unperturbed. In exile he saw freedom and opportunity. He informed Xol that he would conquer the planet Mars in his name. After arriving, the two were met with resistance from the Warmind Rasputin, trapping them within the ice of Hellas Basin.[7]

The Taken and Red Wars[edit]

The only reference to Nokris known to the Guardians prior to his awakening on Mars was a statue found in the Dreadnaught near the Altar of Oryx[8], beside similar statues of Crota and Oryx. The Guardian's Ghost infers it is a Hive god from the accompanying Hive glyphs but couldn't recognize the symbol.[1] At Eris Morn's request, Asher Mir scoured his library for references to Nokris but found none.[9].

"Rasputin was not the only thing to awaken on Mars."
— Zavala[10]

After the deaths of Oryx and Crota, and the end of the Red War, Nokris and his master were awakened when their entrapping ice began to melt; an effect of the Traveler's waking. Together, they sought the destruction of the Warmind Rasputin for their imprisonment and engaged once more with the Warmind. However, interference came in the form of the Guardian working with Ana Bray. Nokris encountered the Guardian during their mission of using a small shard of the Traveler as bait to lure Xol out and destroy him. However, Nokris faced them instead and fought the Guardian in a fierce battle. Despite his power, Nokris was incinerated by the Guardian, having failed to protect Xol from its destruction.

"My life is spent: servitude to those who cast me away. Our blood is all that remains of the old pact."
— Nokris to Savathûn[11]

Nokris managed to evade permanent death following Xol's defeat, only to be left abandoned within the crust of Mars. His attempts to reconnect with the Worm God were rebuffed, as it had already found more worth in his slayers. Dejected, Nokris sought entry into the Ascendant Plane, which was previously denied to him due to his rejection of the Sword Logic, using a fragment of Xol's remains to force open a gate. He lured fireteams of Guardians under the pretense of resurrecting Xol into slaughtering him and his revenant Hive, gaining enough power from their acts of violence to feed Xol's remains enough to use it to pierce a tiny hole into the Sea of Screams through which his soul could slip into.

However, the trickery he used attracted the attention of his aunt. Although expecting to be used as nothing more than a simple pawn, Nokris struck a bargain with her after Savathûn offered him a place in her Court and acknowledged his value in being able to overturn the Sword Logic and those bound by it. As Savathûn sought to elevate herself from the Darkness, which her whole being was tethered to by the Sword Logic, she desired Nokris's knowledge of Necromancy. In exchange for his secrets, she would grant him access to the Dreaming Mind so that he could learn how to Take. Savathûn also foresaw the arrival of the Black Fleet in Sol, and so she instructed him to interfere in any of their attempts to communicate with the Guardians.[11] 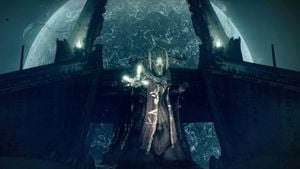 "Whispered gifts are promised blades that twist. A liar's game."
— Nokris' whispers in the Ascendant Realm

Two years after his initial defeat on Mars, Nokris would resurface as the Supplicant to the Witch-Queen herself, playing his role as a catalyst to intervene with the Witness' messages at the Tree of Silver Wings on Io. Armed with massive Shriekers belonging to Savathûn, called: Savathûn's Witnesses, the Supplicant would shroud the Cradle with the Witch Queen's influence and even lay a trap out for Eris Morn and the Guardian; threatening the life of the former and pulling the latter into a counterfeit version of the Witch Queen's throne world within the Ascendant Plane. Eris barely survives her encounter and in turn saves the Guardian from the full force of the Witness Shriekers.[12]

For a period of eighteen weeks, Nokris commands armies of Hive and the Taken to swarm the Tree and shroud it in Savathûn's influence with one of her Shriekers, barring the Black Fleet's communications directly with Eris and the Guardians. Each week, the Guardians would face one of the massive Shriekers at the Cradle before they are summoned back to the Ascendant Plane, to which Nokris mocks them in whispers and even insult their Ghost at one point, drawing comparisons to a Worm. Nonetheless, the Guardian's efforts wore proven successful at destroying the massive Shriekers and allowing Eris to briefly interpret the Black Fleet's messages with the Seed of Silver Wings.[13]

On the final week, Eris had successfully identified Nokris as the source of the interference just as the Supplicant would summon the Guardian into a new area of the Court, where he would face them directly once more near the backdrop of a massive Taken Blight the size of a star. Throughout the fight, Nokris addresses them as a mere pawn tied to the everlasting struggle between Light and Darkness, to which he offered to have them free of in eternal servitude to Savathûn. However, the Hive heretic's offers would only fall on deaf ears as the Guardian destroyed him for seemingly a final time, diminishing the Witch-Queen's influence considerably and allowing the Witness' final message to reach the Guardian. [14] 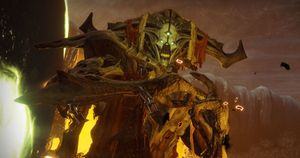 Nokris is the boss of the Strange Terrain mission and is encountered at Xol's feeding grounds. He fights primarily by firing Solar blasts at the player and occasionally summoning Hive to assist him. For very third of his health depleted, Nokris will break two of the pillars in the arena and retreat to the gate at the front of the battlefield. Nokris will proceed to shield himself in an immunity shield. To break the shield, the player must find the large green crystal that came out of one of the two pillars Nokris broke, find the recently resurrected Ugul Gar Knights, kill them, and throw the dropped relic at one of the crystals and then the next to stun Nokris and take down his shield. In the strike version of the mission, two crystals will spawn every phase. During the first immunity phase, he will stand still while summoning Hive, during his second phase, he will begin firing darkness blasts at rapid succession, and at his last phase, he will begin moving around the arena, using his Dying Star ability.

In Interference, there are few changes to Nokris's mechanics from Strange Terrain, aside from a change in environment. During his first two immunity phases, one crystal will spawn on one of two floating islands located behind the arena, guarded by Taken enemies. Two Envoys of Savathûn will also spawn before Ugul Gar Knights can appear. This starts with the Wizard variant, then the Knight and Ogre variants in the second and final immunity phases respectively. Additionally in the final phase, two crystals will spawn hidden behind walls on new floating islands, which players must bypass by climbing up to the islands while carrying their relics in order to destroy them.