The High Celebrant of Xivu Arath was an Ascendant Hive Knight tasked by Xivu Arath, God of War with creating an army of Wrathborn in the Sol System. The High Celebrant created numerous Cryptoliths dedicated to his master found across the system that corrupted Fallen, Cabal, and other Hive broods alike into worshipping Xivu Arath.

When Xivu Arath's sister, Savathûn, went into hiding for interfering with the Witness's messages to the Guardians, the Hive god took this opportunity to consolidate her authority to all of the Hive within the Sol System. Seeking to establish a foothold over the power vacuum left by her sister, the God of War sent her High Celebrant to oversee the creation of the Wrathborn using Cryptoliths embedded across the system, including on the Moon, the Tangled Shore, and the Dreaming City. He would also hunt the excommunicated Witch Queen and wrestle the Hive in the system free of her schemes.[1]

The High Celebrant would serve as Xivu Arath's envoy with the entire Hidden Swarm of Luna having reached out to his master to be recommitted into Xivu Arath's Horde. With the entirety of the Scarlet Court, led by Crota's surviving daughters Voshyr and Kinox, having gathered into one place at the Enduring Abyss, their communion with the Hive God was interrupted by the sudden appearance of the Warlock Osiris. Facing an overwhelming onslaught of Light, fifteen noble-brood were incinerated by his Dawnblade, including Voshyr and her kin Yishra and Ayriax, while Kinox was consumed by a Nova Bomb alongside her son Ulg'Urin and his Knight guard. Only the High Celebrant stood unscathed from the ferocious assault and was called upon by Osiris to face him.[1]

Xivu Arath would only draw strength from the Warlock's violent fervor and the deaths of the noble Hive; her will projected from the Cryptolith dispelled his Well of Radiance and attempted to enthrall Osiris into a Wrathborn. However, the Warlock resisted the efforts to corrupt him, causing the High Celebrant to instead carve runes into the stone on either side of Osiris to offer him up as a sacrifice for the War God while declaring that all tithes of war went to her. He then plunged his sword into the stone above Osiris head to complete the ritual and activating the runes. The High Celebrant tells Osiris to die well before it departs back into Luna's depths. However, Osiris escaped Xivu Arath's grasp with thanks to the sacrifice of his Ghost Sagira.[1]

However, after the death of Sagira, Savathûn, the Witch Queen would find the Light-less Osiris and spirit him away; assuming his position by impersonating the Warlock. 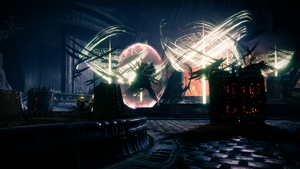 The Celebrant as it summons reinforcements.

High Celebrant begins its hunt for the head of the heretic Savathûn, who had now disguised in the form of Osiris, as he tracked her down to the Hellmouth on Luna, where Cryptoliths have grown to convert and summon the Wrathborn Hive. Commander Zavala would get receive word from "Osiris" and summons the Guardian to save the supposedly Light-less Warlock, whom the High Celebrant had cornered at the Shrine of Oryx. Trapping "Osiris" inside of the Shrine, the Celebrant would send waves of Wrathborn reinforcements to stall the Guardian as he made his way to finish off the former. The Guardian eventually caught up with the Celebrant, forcing the Knight to flee into the Ascendant Realm where he would make his escape.[2]

Roughly eight weeks following its initial escape, the Hunter Crow was able to locate the Celebrant hiding within the Dreaming City thanks to the Guardian's numerous Wrathborn hunts. After upgrading the Cryptolith Lure, The Guardian and Crow made their way to the Cryptolith within Harbinger's Seclude to summon the High Celebrant and end him once and for all.[3]

As the Guardian was able to activate the Cryptolith, the Crow was able to tag him to make sure he wouldn't escape from them again. The Celebrant would skirmish with the Guardian before leading them through a wild goose chase throughout the Harbinger's Seclude and the Ascendant Plane; all while summoning both Fallen and Hive Wrathborn to delay both Guardians. However, the Knight would succeed in escaping into the Keep of Honed Edges and close the portal behind it, cutting the Guardian off and trapping Crow inside to deal with him.[3]

While the Guardians were seemingly stuck in a hard place, the Guardian used the Cryptolith Lure to forcefully open up one of the preexisting rifts to the Ascendant Plane. After having bested the Crow by breaking both his legs and throwing him into the abyss, the Celebrant summons waves of Wrathborn Fallen and Hive to deal with the Guardian. During the battle, the Celebrant had succesfully trapped the Guardian within a Hive Trap and opens up another rift to make his escape, only for Crow to intervene by destroying the portal from the other side. While the Knight was staggered from the destruction of his only exit, the Guardian was free to finish the Celebrant off and ends his scheme once and for all.[3]

The High Celebrant is encountered twice in two separate missions. For the Wrathborn Hunt/Coup de Grâce mission, refer to the second section of Gameplay.

Trail of the Hunted

With the Cryptolith Lure charged and fully upgraded, the Player Guardian with the assistance of Crow set off towards the Dreaming City to pull the High Celebrant out of hiding and finish it once and for all. Landing in Harbinger's Seclude, Players are tasked to proceed further into the Seclude within the Dreaming City and seek out the nearby Cryptolith. Following the directions given, Players will encounter a small amount of Hive in the way that should be very easily taken care of. Upon killing these Hive, the door barring the way should open to a larger area where the Cryptolith is. Placing down the lure, the High Celebrant will appear and begin to teleport around the immediate area repeatedly. It is advised not to waste ammo during this and to instead wait until the Celebrant summons corrupted Wrathborn that can be killed to obtain the 'Wrathful' buff. Upon damaging the High Celebrant enough they will flee through the Ascendant pane leaving a spherical 'tear' in their wake. Players shoot this dark sphere and it will open a portal to the Ascendant Plane to pursue the Celebrant. They would follow the blood trail and return back to the material plane when shooting open another tear and be met with the Celebrant once more. Of course, without the wrathful buff, or as Ghost claims 'reclaimed Light' damage done to the High Celebrant is not optimal. Players must simply wait for Crow to flush out Corrupted Wrathborn from the Ascendant Plane into the same room as the Player which the Player can then kill for the pools that grant the wrathful buff. After enough damage, the Celebrant will flee once more and Players again will have to shoot open the residual tear it leaves behind and follow its trail of blood through the Ascendant plane. Following the trail, Players should end up back where they first encountered the Celebrant in the Dreaming City on shooting open another tear. Multiple enemies, including a Barrier Knight Champion, will be present. It is not required to have an Anti-barrier mod unless Players are really under leveled as the Barrier Knight can be killed quick enough with optimal DPS before it can even deploy its barrier.

After killing these enemies, Players will proceed forwards to encounter the Celebrant teleporting away from them repeatedly with an Immunity shield. The Celebrant will summon Hive reinforcements including an Ultra Wrathborn Hive Ogre. Players must kill this Ogre and the rest of the Hive. Having Crow trapped in the Ascendant plane and no residual tear left by the Celebrant, Players must plant down the Cryptolith near the large Awoken statue where the Ogre had spawned. This will force open a portal above the statue. This portal is impossible to jump to. Instead, players must follow the blood trail and discover hidden platforms that only appear once close enough to them. Following these platforms, Players should be able to reach the portal and enter the Ascendant Plane one final time. Navigation is important during this stage as the background and safe surfaces appear the same. Players must proceed to the lit Awoken structure housing an Ascendant Crystal. It should be noted some of the platforms vanish once touched by Players so constant movement is essential. Upon reaching the structure with the large Ascendant Crystal, Players will face off against the High Celebrant for the final time. Reinforcements akin to before will be summoned and Players should target the Corrupted Wrathborn Majors to obtain the Wrathful buff from the pools dropped. Once the High Celebrant is damaged enough it will try and flee in desperation, summoning more Hive and a Barrier Servitor. Once these enemies are killed, the High Celebrant will trap the Guardian and attempt to escape, however, Crow will close the portal it is trying to create. With this blow, the High Celebrant kneels and accepts their fate as the Player is freed and can land the killing blow.