The Cryptolith Lure is a device created by The Crow to lure out Wrathborn corrupted by Cryptoliths. 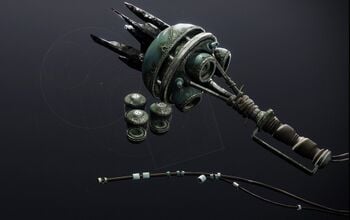 Crow looked furtively over his shoulder as the hydraulic doors to Spider's personal treasure trove whooshed open. He had the gang boss's blessing to peruse the collection in hopes of finding something to combat the spread of the Hive cryptoliths. Nevertheless, Crow felt a subversive rush as he assessed the aisles of display cases, filled to the brim with curios and artifacts.

Glint maneuvered through the rows, scanning item after item. "Look—an Ahamkara brain, fully intact! And here—a Golden Age missive written on pulped plant matter! And this looks like a pre-Collapse datapad, named after a fruit! And here's—"

"Glint," Crow interjected, "do you hear that?" The Ghost froze in midair.

In the stillness of the subterranean bunker, Crow could hear something in the room. Not moving, not rustling, but… whispering? Yes. A soft voice, calling out.

Crow crept to the back of the room, toward a City Age cabinet, filled with extinct circuitry. On the bottom shelf, covered in dust, was a nodule of Hive technology. Crow remembered seeing similar components atop Hive Seeder Ships.

Crow picked up the component. The whispering increased to a near-audible level, both comfortingly familiar and repulsively alien, before falling silent.

"This is it," Crow muttered to his concerned Ghost. "I found our transmitter."