Xivu Arath's Horde is an unidentified Hive sect that serve directly under Xivu Arath, God of War. Some Taken also appear under this sect.

Two years following the death of her brother Oryx and sometime after the Red War, Xivu Arath began committing her forces to the Solar System, possibly in aid of her sister Savathûn or for her own schemes. An Ogre, Megor, Spawn of Xivu, was imprisoned in the Prison of Elders had seemingly been leading a Hive cult with Ir Yun, Cult of Megor and would later break free from containment during the Scorn's jailbreak.[1]

Curse on the Dreaming City[edit]

After the breakout, a substantial force of Hive and Taken had begun to pillage Awoken artifacts for unknown purposes. It would later be revealed that members of Xivu's own brood, Sugroth, Hasaak and Tulkor were sent to both steal the artifacts and keep them out of the Guardian's reach. As the Guardians would cut through Xivu's forces, they would find out that some Taken champions, Crorok and Xaras were apparently obedient to the war goddess with the latter being the commanding force of the Taken and Hive's pillaging schemes.[2]

After the blunder of their artifact theft, members of Xivu's own lineage, An Ragaar, Tir Balok and Xavan, while aided by Ruithe, utilized Blights to block communications with the Oracle Engine from both forces of the Scorn and Guardian alike. However, the Guardians would take relics dropped by Xivu's slain forces to destroy the Blights and gain entry towards the Spine of Keres.[3]

One of Xivu's former champions; Jaxx, Claw of Xivu Arath, can be seen manifesting in the form of an Nightmare, however, would be slain by the Guardians.

In a ploy to seize power in the wake of many destinations vanishing, Xivu Arath's influence in the form of her Wrathborn and the High Celebrant of Xivu Arath would appear. The High Celebrant was sent to Luna to wrest free the Swarm from The Witch Queen's plans and instead reform Luna in Xivu's image. A world where all tithes were tribute to her. The High Celebrant would, however, have their plans thwarted by Osiris, who slew the near entirety of the Scarlet Court. Osiris would fall and strain against the sheer will of Xivu Arath's projection resulting in the High Celebrant marking runes around him and preparing him for his death. Despite surviving the loss of his Ghost, Sagira, Osiris was greeted with little respite for the High Celebrant immediately sought off to hunt him only to be thwarted again by The Guardian instead, forcing them to retreat back to the Ascendant Plane. 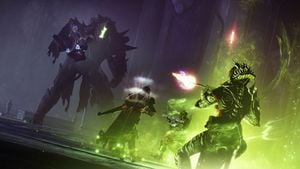 Following the Darkness's arrival, Nokris' fall, and various worlds of the Sol System going dark, the Guardians discover a rise of corrupted Hive activity within the Tangled Shore and the Dreaming City of the Reef. They soon learn that the Hive's God of War, Xivu Arath, has begun to marshal her forces in preparation for the Darkness's next move. This was achieved from her Cryptoliths, organic Hive structures that borrow into the material plane and root themselves, calling out to nearby beings, drawing them closer to be transformed into Wrathborn. These Cryptoliths started corrupting Eliksni but quickly spread to Hive and Cabal. Commanded and aided in their spread by the High Celebrant, they would be the Wrathborn's command and Xivu Arath's lead in the system. To combat this threat, the Guardians agree to a partnership with the Spider and to work with a mysterious Lightborn called the Crow, who is, in reality, Uldren Sov revived as a Guardian. In the ensuing weeks Wrathborn of House of Spider, House of Dusk, and the broods of the Hive would be hunted down. As for the corrupted Red Legion, none were encountered, which has concerned Crow.

Sometime following the Hunt for the Wrathborn, Savathûn sought to undermine the Cabal homeworld of Torobatl by guising as her sister by corrupting Evocate-General Umun'arath into becoming a worshipper of Xivu Arath. Driven by obsession over war, Umun'arath undertook a Hive ritual in the capital city to summon the God of War to their planet, which was accidentally completed when Caiatl, the Princess-Imperial slew Umun'arath, providing the blood and sacrifice needed to open a portal for Xivu Arath to cross through with her armada of War moons and her armies of Hive.[4] As she invaded Torobatl, Xivu Arath declared that the Cabal had been worshipping her for as long as they venerated war and that she had finally come to claim her "overdue" tribute.[5] Her never-ending forces overwhelmed the Cabal's defenses and drove Empress Caiatl to evacuate the remaining population to the remnants of her fleet and retreat to the Sol System.[6]

Hunt for the Witch Queen[edit]

Despite the "gift" Savathûn had given to Xivu Arath, the Hive God of War had begun to actively hunt her sister, at the behest of another, following the arrival of the Black Fleet in the Sol System. To save herself from her sister's wrath, Savathûn adopted the form of Osiris after he had become lightless when the High Celebrant killed his Ghost, Sagira. Knowing that her sister would never think to look for her in a place of the Light, Savathûn laid in hiding at the Last City, posing as the legendary Warlock, aiding the Guardians in their efforts against Caiatl's chosen champions and the Endless Night that plagued the Last City. However, after Lakshmi-2's failed conspiracy against the Fallen House of Light that had allied with Guardians, Savathûn fled to the Reef, meeting with the Awoken Queen, Mara Sov. The two queens would come to a bargain, in exchange for excising her worm, the Witch Queen would release Osiris. Further, Mara Sov required the Guardian's assistance in restoring the Dreaming City from the Ascendant Realm's corruption using the dimensional Ley Lines but also wished to prevent Xivu Arath from using the Blind Well and its dimensional properties to her advantage. To solve this and excise the worm in Savathûn, Mara Sov required her coven of Techeuns that once escorted her in the Ascendant Realm which had been lost across the Ley Lines after Xivu Arath and her horde cornered them.

Xivu Arath's Horde, both Hive and Taken, would constantly battle the Guardians within the Blind Well, hoping to claim it for Xivu, as corrupting either the Blind Well or the Ley Lines would allow Xivu Arath to bring an "infection of war", as Mara Sov put it, throughout the universe. Her forces, under the control of one of Mara's Techeuns, were able to infect the Ley Lines within the Shattered Realm which had appeared to be a fractured version of the EDZ.

In the coming weeks, it would later be discovered that forces of the Scorn seemed to have allied with Xivu Arath or forced into submission under her rule. These Scorn would also be sent to infect the Blind Well under the command of Kruutiks, Reefbane. Scorn within the Shattered Realm managed to detain a Techeun within a Fallen Cryopod and kept it under guard through the use of a Scorn Scrapwalker and their region of the Ascendant Plane appeared to be a part of the Tangled Shore.

Xivu's forces would eventually take hold within another part of the Shattered Realm, this time being fractured regions of the Moon under the control of An Xohol, Jaws of Xivu Arath. At the time, Xivu had also sent in her various hordes under Pillager Warbands to stop the Guardian's attempts to locate the Awoken secrets within the Shattered Realm under the guise of Hive, Taken and Scorn.

On the day of the ritual to exorcise Savathûn's worm, Xivu Arath's brood, in a last-ditch effort to capture their master's sister, launched a massive assault on the Dreaming City and attempted to overwhelm the Blind Well. Despite being unsuccessful in preventing the realignment of the Ley Lines, this would allow the Hive army to travel through the Ascendant Plane and begin swarming the Ritual Spire, in which the exorcism was taking place until they were once again pushed back by the Guardians. Desperate to capture Savathûn, Kruutiks, Kholks, and finally Kelgorath, Risen from Bones, forced their way into the Spire, followed by hordes of Xivu's forces, and attacked the ritual, but ultimately failed and were defeated at the hands of the Lightbearers.