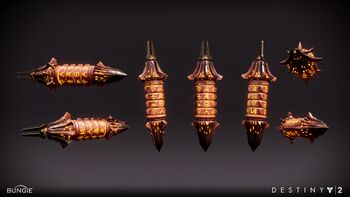 The Cryptoglyph is a Hive artifact, imbued with incredibly powerful magic. It was used by Hashladûn, Daughter of Crota and her sisters to command and protect themselves against the Nightmares generated by the Pyramid beneath the Scarlet Keep.

With the Cryptoglyph, Eris uses it to empower her Lectern of Enchantment in order to forge more armor needed to infiltrate the Pyramid and resist the Nightmares.