"The Nightmares appear to be extracted from our very psyche—violent manifestations that wreak havoc, tormenting us with our past trauma. They tease us with a life we once knew, prying into our minds and attacking our most vulnerable points. This assault on our emotions is aimed to weaken us and our sense of purpose."
— Eris Morn.

Nightmares are apparitions of Darkness created by the Lunar Pyramid for psychological warfare; manifested as past figures and enemies to exploit the trauma and worst fears of Guardians and other beings. First appearing following Eris Morn's discovery of the Pyramid beneath the Moon, the Nightmares include phantoms of some of Guardians' deadliest foes, including Crota, Fikrul, Ghaul and Uldren Sov.

According to Hashladûn, Nightmares are malleable creations of the Pyramid, not truly alive but made of "chaos, negation, and the raw things found existing in spaces between thought and fear."[1] They are extracted from the psyche of targets, wreaking havoc by provoking grief and trauma as well as presenting a physical threat.[2]

Nightmares are usually surrounded by a miasma of crimson reddish-black Darkness with radiating ghostly tendrils. Eris initially surmised that the true purpose of the Nightmares was a tool to manipulate and exploit Guardians at their weakest; for the explicit temptation towards the Pyramids and their promises of power.[3] This would be recanted much later when she revealed that the Nightmares were in fact a defense mechanism to drive away those who would tamper with the lunar Pyramid.[4]

The Nightmares are found primarily near and in the Scarlet Keep citadel, which was built in close proximity to the Pyramid. Beyond the moon, Nightmares had propagated on other celestial bodies, roosting in Lost Sectors as its previous enemy tenants.[5] Calus, the exiled Cabal Emperor, would weaponize the Nightmares to his bidding by forming a psychic bond between the dormant lunar Pyramid and his massive flagship, the Leviathan. This in turn transformed Calus' ship into an extension of the Pyramid's resonance and allow for new Nightmares to haunt the derelict vessel.[6] 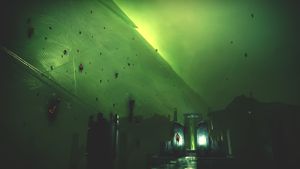 Nightmares are enemies that debut in Shadowkeep and are primarily encountered in Lost Sectors and during endgame activities like Nightmare Hunts and Altars of Sorrow on the Moon. They can vary in difficulty; such as Elite, Major, and Ultra, and drop phantasmal orbs upon death that grants players an "Unstable Essence" damage buff on all other Nightmare enemies for ten seconds. Nightmare bosses are often accompanied by two Major mob enemies that can respawn if destroyed, most often when boss health reaches halfway and if there are no current Nightmare enemies standing then.

Ultra-tier Greater Nightmares, especially the ones found in endgame activities, have an additional mechanic that renders them intangible with immunity to damage in a reddish-black ethereal form after they spawn additional Nightmare mobs; forcing players to clear them first to initiate the next damage phase.

Nightmares have a chance of dropping "Phantasmal Fragments" and even rarer "Phantasmal Cores" as a resource to craft weapons and Dreambane Armor at the Lectern of Enchantment, which are unlocked from Nightmare Essence weapon bounties (which can drop from bosses during Nightmare Hunts and randomly on the Moon). Even certain armor mods equipped to Dreambane armor are effective in both warding and boosting damage against Nightmare enemies.