"We are Amtec's vengeance …and while she struck from the sun, we strike from the shadow."
— Yirix

The Psion Conclave, sometimes referred to as the Enclave, are a rogue cell of Psion and Cabal from the Red Legion and Imperial Cabal seeking to achieve retribution in the name of Amtec and her Sisters before her. They directly serve Yirix and are actively confiding with Emperor Calus and his Loyalists.

" I know your purpose. I understand."
— Amtec

The Psion Conclave was formed in secret sometime after The Almighty Crisis when Amtec had taken over the reins of the Red Legion as its Commander. Recruiting a swath of Psions and some Cabal into the cell, Amtec managed a sizable contingent utterly subservient and unwavering in loyalty to her that even when her fate became ambiguous, the Conclave carried onwards in her name.[1] In addition, the Conclave had also been formed from the mutual congress amongst most Psions and might have existed long before.[2] 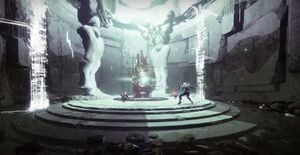 "Ghaul was no fool."

"This is not his credit. Ghaul did not invent this technology, but we will learn from his failure."
— Yirix to her Sister

The Conclave of Psions would meddle in secrecy before acting in the cover of Empress Caiatl's advent to the system. Understanding the inability to destroy The Last City, Yirix would instead seek crippling of its leadership in Amtec's name. These same ideas would coincide with the ravings of Ixel, the Far-Reaching and even influence the mind of Ignovun, Chosen of Caiatl. Gathering fellow conspirators under her, Yirix and the cell worked in secret - dispatching members to Nessus in the hopes of harnessing the Vex Prediction Engines to assist them in their goal. Acting on Ixel's foretellings of the future where the Vanguard Commander Zavala suffered a final death, three Psions snuck into the Last City and stole remnants of the Traveler Cage from a Häkke facility.[3] After amassing the information they had sought the conspirators aimed to destabilize the Guardians and their leadership, using the refined Light-Extraction and Detainment tech derived from Dominus Ghaul to achieve so after having tested it repeatedly in the field.[1][4] The conspirators first sent a lone assassin into the Last City to slay Zavala in a garden while he was distracted, but he was warned of the assailant by Crow and killed the Psion.[5]

Challenged to a Rite of ceremonial combat after weeks of conflict, Caiatl would send forth Ignovun as her anointed representative, along with a bulk of Imperial loyal Red Legion, to challenge the chosen Champion of The Last City in the Proving Grounds inside the Halphas Electus.[6][7] Taking place after the aforementioned Rite, Yirix sent Qalec and Valir to try again at a ceremony marking the beginning of an armistice between the Cabal Empire and the Vanguard. The second assassination attempt was close to success, but Crow once again interfered and saved Zavala's life with the aid of Empress Caiatl who slew Valir in the attempt. [8] Dispatching one of her Imperial Guard to seize the other who pulled the trigger, Qalec was captured and executed by Caiatl who vowed to hunt down and exterminate the rest of the Psion conspiracy as traitors to the Empire.[9] After Ignovun's defeat in the Proving Grounds and the armistice, Caiatl would lose a lot of support, despite the honorable rite, and several Cabal dissidents of the Red Legion defected, swelling the ranks of the deserters and conspirators once more.[10][11] 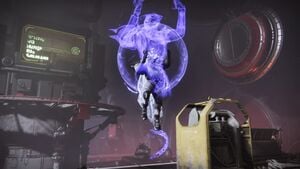 Qabix within the Psion Bunker on Mars

" Only one Psion alive would have such intimate knowledge of this. The traitor Yirix"
— Empress Caiatl[12]

After Caiatl's unilateral emancipation of all Psions within the Empire,[13] some Psions who had attained high rank under the old order were indignant at what they perceived to be their loss of status. During the events of The Witch Queen, a group of these rebellious Psions led by Qabix, Insurgent deserted from the Imperial Cabal, stole a Cabal frigate, and somehow made contact with the Loyalists of Emperor Calus.[14] With Loyalist funding, the rebel Psions reactivated an abandoned Cabal base on the recently-returned Mars and began transmitting psionic propaganda across the Solar System from it. Detectable only to other Psions, the transmission encouraged further defections from Caiatl to join Calus and the Pyramids for "salvation". Unwilling for Cabal soldiers to be seen attacking Psions, Empress Caiatl brought the matter to her ally, Commander Zavala of the Vanguard, who deployed The Guardian to assault the facility with air support from Amanda Holliday, stopping the transmission.[15]

With the transmisison shut down, Empress Caiatl finds that the broadcasts are comprised not of words but images, feelings and impressions. Using her Optuses, Caiatl is able to see the message being transmitted, seeing a psion at the head of a full Cabal Legion. Above them hovers a black Pyramid but behind them stands a towering golden statue. A statue of her father, the former Emperor Calus, with arms outstretched and beckoning. Caiatl can hear her father's voice promising refuge and salvation which leaves the Cabal Empress unnerved. Following this, the Guardian also finds a storage vault filled with golden treasures similar to those found on Calus' Leviathan leading Zavala to believe that Calus is funding the rebellion against Caiatl. In this, Zavala agrees to have the Vanguard conduct a search for the Leviathan and Calus, and once they do, they will inform Caiatl, with the empress promising that once they do, she will deal with her father herself.

About a week later, the Vanguard discover that the base had been reinforced quicker than anticipated, forcing them to travel back to the bunker and shut down the broadcasts again. After shutting down the broadcast, Caiatl looks into the message and, this time, sees a scene of violence, along with herself, realizing that what she is seeing is the failed attempt on Commander Zavala's life, through the eyes of the assassin, and the memory of his death at Caiatl's hands. From this message, Empress Caiatl is able to deduce that only one psion would be left alive to have such intimate knowledge of the event: the traitor Yirix and her enclave.

Now knowing the identity of their foe, the Vanguard works on disrupting her operations as much as possible, leading the Guardians to attack another base sending out psion propaganda that are eroding Caiatl's legions. The Guardians enter the bunker and battle with more defectors and possible clones funded by Calus. In the message, Caiatl can see a group of psions conducting a religious ceremony, during a time before they were assimilated into the Cabal Empire, leading the empress to believe that Yirix is attempting to stir a sense of forgotten Psion unity, under the banners of Calus and the Black Fleet. The Empress would find this message ridiculous as the psions had long subjugated such beliefs themselves before the cabal conquered them.

The Guardian would return to storm the base after Yirix resumes to spread her messages amongst the Legions, leading tensions to run high amongst the Psions and defections to occur. With Calus's cloning operations in full swing, the loss of life is of no concern, regardless of how many times the base is taken or destroyed, as Caiatl would comment. After defeating the Insurgent Psion and shutting down the broadcast once more, Caiatl sees the latest of Yirix's messages, which shows the same message over and over again, flashing almost too quickly to perceive. However, Caiatl is able to deduce that the messages must actually be Psion divination, impressions of things yet to come. In them, Caiatl can see the Last City besieged, The Shipstealer revived, the Leviathan reborn and the Traveler itself infected with Darkness. With the death of the Psion within the Psiroium at Crow's hands and Saladin Forge's approval into the Empress' War Council, an entire cruiser defected from the Empress' fleet. [16]. It is unknown if this was the same ship aforementioned.