This article is about the Lunar artifact. For other uses, see Anomaly. 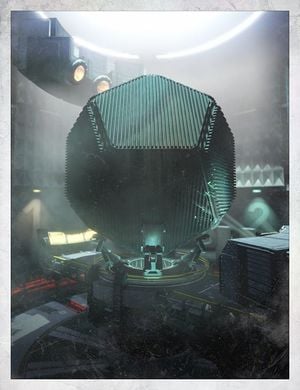 " It is lonely. It is impossibly, inexpressibly sad, beyond the capacity of the human limbic system to experience. But it is content in its loneliness, and in its beautiful sadness. It is the light of the first sunrise after your lover leaves forever. It is the acceptance before death. Transcendence lies not in the denial of attachments and limitations but in the complete understanding of our confinement and the tautological tyranny of existence. The final stage of Buddhism cannot be attained. There is no escape from samsara for it is as closed as a lock. Heaven is invaded and its territories are afire and all its mountains have been shattered into thrones. This is the inevitable and perfect shape of the truth.
It is magnificent. Majestic. Majestic."
— The thoughts of K1 Project Commander Kuang Xuan, while meditating in the presence of the Anomaly

The Anomaly, as it is referred to by the scholars of the Tower, is an artifact of extraterrestrial origin located on the Moon.

The Anomaly appears to be associated with the Darkness, which Clovis Bray I referred to as "Clarity" during his studies of the artifact.

The Anomaly was first discovered during the late Golden Age, when lunar miners bored into a subterranean tunnel. The instruments and boring machine failed instantly upon breaching the chamber, although the suits of the miners were inexplicably unaffected. The research site known as K1 was subsequently built to study the Anomaly.

Research staff at the K1 site soon began experiencing a range of adverse psycho-physiological effects, including insomnia, increased stress hormone levels, and hallucinations. Eventually an enclosure, known as the MASM Cladding and Containment Unit, was built to contain the artifact and limit its effects. Despite the troubling effects of proximity to the artifact, one researcher developed insights during a bout of insomnia that led to a breakthrough in the development of interstellar drive technology - a discovery which led directly to the development of the colony ships used in the Exodus Program.

Later, Clovis Bray I communed with the artifact, and was instructed by it to go to Europa in search of a secret that would grant him immortality.

The Anomaly remains on the moon to the present day, contained within its dodecahedral cage. A Crucible field has been established in the research facility which holds the artifact.