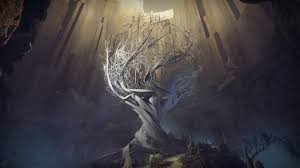 The tree of silver wings in the Cradle.

Following the second arrival of the Pyramids in the Sol system, a tree of silver wings was discovered by Eris Morn in the Cradle on Io. The relationship of this tree to the original "tree of silver wings", which existed either within the Black Garden or the metaphorical "garden" that gave rise to the universe, is unclear.

During the arrival of the Pyramids, Osiris recovered a seed from the Pyramids[1]. He later received a message from Mara Sov relayed to him through Brother Vance, which instructed him simply to "plant the seed"[2]. This suggests that the tree grew from the seed Osiris planted, or at least that Osiris placed the seed at its base. However, Eris Morn claimed the tree had been created by the Traveler back when it was transforming Io during the Golden Age.

After one of the Pyramids settled over the Cradle, it began projecting a beam directly onto the tree. As the Tree feeds on Paracausal energy and integrates it into itself, with Light and Dark vying for dominance in its structure,[3] the Pyramid feeding it an influx of Darkness without the Light slowly transformed it over a period of weeks into a darker version of itself with a crown of more angular, jagged "leaves".

During its transformation, a new branch grew at the base of the tree, which was then taken by the Guardian and crafted into the trace rifle Ruinous Effigy.