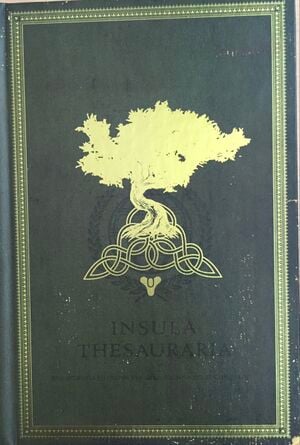 The cover of Cayde-6's book. It bears the same image as the Insula Thesauraria emblem.

Cayde's Treasure Island Book is a piece from Destiny: The Taken King Collector's Edition. Inside this book are notes from Cayde-6, recounting his memories from the past. These notes reveal a substantial amount of information concerning not only Cayde's own backstory, but also of the Exo, the Ahamkara, the Ishtar Collective, and other objects in the Destiny universe.

Inside of the book is a separate page, a letter to the reader. It reads as follows:

And what you're holding in your hands - this book - that's mine, and it's precious to me.

Don't sweat it. I'm not upset. In fact, I'm going to let you in on a little secret. I wanted you to find this book - whoever you are. I figure you must be clever, discreet - good at finding things other folks miss.

You're a collector - the intel and acquisition sort - and if you're acquiring said intel from the Speaker's personal library, well, then I figure you must fancy yourself the adventurous, risk-taking type.

I understand. I appreciate a gamble as much as the next. Gets me in trouble from time to time, but seeing as we're kindred spirits, I'm willing to bring you in on some of the other secrets I keep.

That is, assuming I've got the right Guardian.

Either way, you and I, we've got official business to attend to now. Bring me back my book and let's get down to it.

You know where to find me.

Spend some time with an Exo who's been through it like we have and you'll see all the tells.

See, the reboots, they don't wipe it all away. Not everything. And the new life - plus the Light - it does something real funny to what's left. Amplifies it, scrambles it, reshuffles the fragments like a dealer riffling a deck of cards, putting the hands we've already won and lost back into play.

Most of us do what we can on our own to forget. Let the itch go unscratched.

Me? I learned long ago you gotta play the hand you're dealt.

It ain't all right, but I'll be damned if it ain't the truth.

Floating in the black

Time to go to work. I'll spare you the gory details.

Afterwards, fuming. Clovis Bray sends me a bill for the hull damage. My fault the target put a blast wall between us. My fault things went wrong and we had to let our rifles do the talking.

I tear the packet open. Tattered pieces of the envelope drift to the floor. [Spade insignia pencil drawing]

Surprise. It's not just a bill. There's a job offer tucked in. Seems old Bray's been looking for someone like me. Willing to forgive my debt, and not just for the orbital station. All of it.

Suddenly, I ain't so mad anymore.

[The Last Word pencil drawing] Say the name Jaren Ward. Hunters need to get their words in edgewise.

[Picture of the hunter Arachnid chest armor] No feast can be had in comfort. Not out in the frontiers.

[Stamp of the Treasure Island tree logo] Eleven Points, so it was said. You are Free to Remove.

Saturn. No, someplace else. Someplace colder.

This moon has been almost completely converted, a sarcophagus of ice and iron.

Stone towers rung round with glaciers, rooted deep within a heart of snow.

I came here flesh and bone. Gave everything to the ice.

The coast is different, beautiful and unbroken and timeless. It teems with new life. Every big brain in the system has their sights on the Academy.

We were there for the Ahamkara, parasitic reptilian critters that appeared out of thin air. Inexplicable genome. New proteins. So much potential.

And me? I'm there for her. Dr. Maya Sundaresh. She's poured into the research, on the brink of another breakthrough, focused on devouring every new data point.

I can see her so clearly. Dark hair split into smoothed, shimmering strands fanning over her forehead. Gray irises blooming as she looks up from her work to see me standing there beside her.

No She doesn't know me at all, doesn't even recognize my face even though I've been standing over her shoulder for months. I'm nothing more than a fixture, a required imposition. An unwanted necessity.

I'm no egghead. Never was. Just like now, back then I was on a need to know basis, and the only thing I need to know is that nothing and nobody gets through that door and past me without at least three layers of security clearance and a whole lot of muscle.

Still. I think about saying something. Saying anything. In a second my mind rifles through a trillion possibilities.

But she's already turned back to her work. I shuffle my feet, straighten my back, and return to mine.

Bounty's up on the board. Hive target. Real mean SOB. You know the deal.

These horrors live on for just about forever. Only I don't count what they do as living. They lurk around in the shadows for centuries hoarding knowledge and conjuring up thousands of ways to chew up Light and life. Doesn't matter much. I've learned a few tricks myself.

Fast forward a spell. I'm in the guts of it, deep dark cavern deep below the surface. Can't tell exactly where or when. EDZ maybe. Doesn't matter. In any case I'm right where I need to be, tucked into a shadow, camo cloak humming to keep me well out of sight.

Bam! I dart out from cover, cloak flaring. Out from underneath, I lunge, lifting my hand cannon. It barks out orders. Bathes the room in firelight.

The bullets are true. They always are. Three Thrall turn to ash before they know what hit them. Now it's just me and the target. Big bad bounty. I'm ready to collect. My blade gleams in the sick green terror of his eyes. Strike that. This is all wrong. Timeline's way off.

There's no bounty. No Hive. I'm out in plain sight. Sky is torn open and there's nothing and nobody left in this ruined world but me and the boiling shadow all around. Whatever it is hits me before I can level my gun. Doesn't matter. Tendrils of pain crawl over my splayed fingers, my outstretched arms, my shoulders, my neck, my screaming mouth as it consumes. I'm being enveloped. Everything is wrong. Primordial. My systems go sideways. All but my sensors. It wants me to witness this, the world. It's world now. Suffocating in the black poison. I collapse. We all collapse.

You wake up and look into the cold spaces between circuitry (galaxies?) begging for answers.

But other voices wait. At your center, safe and untouched, sits the original You. Just a little box tucked at the back of a closet, filled with trinkets and odd notions kept for no obvious reason. You have no idea when you last spoke to this tangle, but that's what you do now, using a whisper and the lightest touch, being all sorts of cautious because you're afraid of frightening whatever wants to speak with you. And then it speaks, and instead of answers, it begins with the only question that matters.

"Do you want to know what happens next?"

This one ain't mine. It's someone (something?) else entirely. But it's the most important memory I have.

All this time I've been busy stirring up the past. Never thought about what I was really after. Trinkets and odd notions kept for no obvious reason. Do they matter?

Maybe it's time we let the past alone and climb down from our walls. There's gotta be treasure that shines brighter than any we've been digging up from the bones of our lost world.

Has to be a better hand than the one we've already played. I say we get after it. See what's really waiting for us out in that darkness.

Maybe even light it up some.

Dance in the ash and flames.

The Traveler can follow suit if it feels the need to. Otherwise, it can watch over the City for a thousand years. But you and me? We got far more important things to attend to. We're Guardians. We got a new future to forge.

Cayde's Treasure Island Book contains a riddle that when solved rewards a redeemable code for the Emblem "Star Antigen": 3VF-LGC-RLX. The code can be redeemed on Bungie.net by any player to obtain the Emblem. In addition, redeeming the code provides another riddle: "What day might you parrot Long John Silver, and what code might you enter then?"; entering the code ARR-RRR-RRR on September 19th (International Talk Like a Pirate Day) grants the player a package of 3 Strange Coins.