The Eliksni Quarter is a shelter located in Botza District where the House of Light have settled within the Last City. It is their primary base of operation and home to Eliksni refugees who have fled their old Houses.

The Vanguard support them with supplies such as sleeping bags and various other materials. The Quarters also has 9 scannable Ghost scans where players can learn more about Eliksni culture.

In the Season of Plunder, The Spider and his syndicate moved to the Eliksni Quarter, after disappearing when Mara Sov retook the Tangled Shore after the Season of the Lost. He set up a bar called The Ether Tank, where he resides. The former mob boss would also lead a fundraising drive to help renovate the Quarter using pirate treasures taken as spoils by the Guardians. 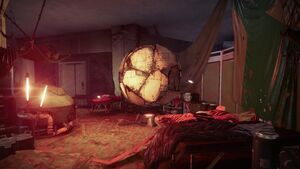 Eliksni model of the Traveler