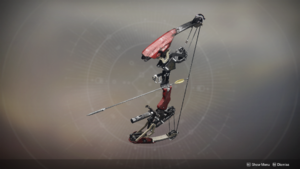 No Turning Back, an example of a combat bow.

"Now, Bows are long-rangers. You got the patience, and a Bow's as good as any Sniper."
— Banshee-44

Combat Bows are ranged weapons that use arrows to attack from various ranges depending on the bow. They were introduced in the Forsaken expansion for the first time in the Destiny series. Although they do not have rapid rates of fire like automatic gun weaponry, they are extremely useful for picking off single targets from a range.

"Will it involve archery?"
"Big old compound bows with all sorts of tactical knickknacks. I'll be the first woman in the universe to place a comsat in heliocentric orbit with a longbow."
— Mara Sov and Sjur Eido[1]

Due to its simplicity, the bow was a fundamental aspect of early Reef history, as both a practical weapon during a time when supplies for firearms were low and as a tool for line-throwing and launching satellites.[1] Sjur Eido was particularly well known for her skill with bows. The modern combat bow made its way to the Last City following the death of Cayde-6, with the VEIST foundry beginning to produce their own design.

From outside the Sol System, Psions are known to have made use of bows, and they may have played a part in their own history.[2][3]

As would be expected from such a weapon, the combat bow plays somewhat differently to other weapons in the game. Instead of a rate of fire stat, bows use a draw time stat measured in milliseconds. Players must draw the bow by holding down the trigger, but arrows can be released early or even without drawing at the cost of lower damage, arrow speed, and a pronounced arc in arrow travel. When the bow is fully drawn, players can hold the charge for a short period of time until their Guardian loses their grip and is forced to shoot an arrow. Drawn bows can be released without firing by pressing the reload command. Compared to other weapons, combat bows fill a role in between scout rifles and sniper rifles, being a relatively low zoom primary ammo weapon with potential damage in between the two classes at the cost of a slow fire rate.