"You have completed the challenge of the Emperor. He is... amused by your potential. You have greatness in your future. And perhaps, someday... But that is not for I, a humble servant, to say. Embrace his name, all glory to the Emperor."
— Benedict 99-40

Benedict 99-40 was a Frame in the Tower Bazaar who had been remotely hacked by Emperor Calus's Loyalists. After completing the Leviathan Raid for the first time, Benedict offered rewards to Guardians in exchange for Emperor Calus Tokens. Each week, Benedict would sell a full set of armor and a weapon comprised of different armor pieces from the Leviathan Raid normal and prestige mode, Leviathan, Eater of Worlds, and Leviathan, Spire of Stars. However, to purchase these armor pieces and weapons, one had to first complete the raid that they originated from. 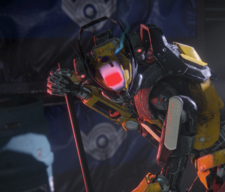 The Guardian came to Benedict while searching for a weapon stolen by a Shadow of Calus from the Vanguard vault, The Fourth Horseman. Benedict claimed that Calus had predicted the Young Wolf would come seeking the weapon and revealed that the Shadow who had stolen it had done so to use it against the Red Legion. However, the Shadow was killed by agents of Caiatl, Calus' estranged daughter. Benedict offered to decrypt the remnants of the Shadows log the Guardian had discovered in order to locate the weapon, but required encryption data from the Red Legion on Earth to do so. Upon decrypting the data, Benedict informed the Guardian that they had located the weapon in The Quarry and that Calus wished for the Young Wolf to retrieve the weapon and massacre the Red Legion present there.[1]