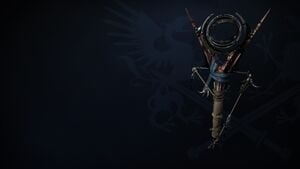 "It is safe."
— Artifact description

The Nightmare Harvester is a Seasonal Artifact for the Season of the Haunted.

The Relic on Mars reveals much about the Crown, and Savathûn's corporeal form. I have unwound a precious few mysteries that I believe can aid us. The Crown's penchant for ensnaring cognition is well-known, but the function by which it does this is a manipulation of the Darkness tethered by Hive incantations and ritual. It is not unlike how the Pyramid projects Nightmares from troubled persons, or phantoms from places of great loss.

I am not so foolish as to attempt to access or wield the Crown directly. We have all seen where that leads. Instead, with assistance from a trusted colleague, I have constructed a medium through which we may safely channel the Crown's influence and bind Nightmares until their essence can be contained for further research. My colleague dubbed this medium a "Harvester." An apt denotation.

Until we know more about Calus's plans, this is our best course of action. I advise all fireteams undergoing deployment to the Leviathan be outfitted with [REQUISITION;DEVICE-HARVESTER]. Once they are attuned to it, possession of a Harvester will offer a moderate level of warding, and more importantly, interaction with the apparitions projected by the Pyramid. Interestingly, in moments of high energy concentration, the Harvester, as if by reflex, will manifest a weapon through the wielder's will.

I have included a list of materials required for the fabrication of a Harvester. May it be the tool that turns the tide.