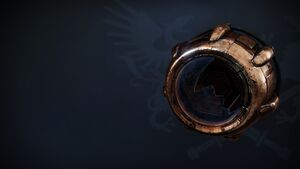 "It looks through you, toward the infinite."
— Description

The Gate Lord's Eye is a Seasonal Artifact in the Season of the Undying.[1]

It allowed Guardians to unlock additional mods to be socketed in their armor. XP earnt leveled up the Artifact. When mods are unlocked and the Artifact is levelled up, the Artifact's Power increased and added to the overall Power of the entire account. There was be no cap to the Artifact Power.

A million lights bend inward. Pulled on a wave of enigmatic tone.

One light alone. Pulled. Discordant. Suspended in the Endless.

Blink. An iris folds in.