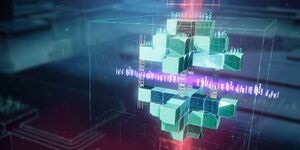 "A cube of living code claimed from the Vex domain."
— Artifact description

The Paradrome Cube is a Seasonal Artifact for the Season of the Splicer.

A cube of living code claimed from the Vex domain.

Mithrax sat on a carpet in his meager quarters, held the Paradrome Cube in his hand, and concentrated.

Hours passed before Eido, concerned, sat beside him. She touched his arm.

"What do you see?" she whispered.

He saw the Endless Night split open. He saw fluid falling like white rain on the City. Massive Minotaurs rising from the shallow seas. He saw the gunfire of the Guardians in the Tower, but it did not reflect on the rippling liquid, and he dismissed the vision.

A choice, and its consequences.