This article is about the artifact. For the raid, see Crown of Sorrow (raid). 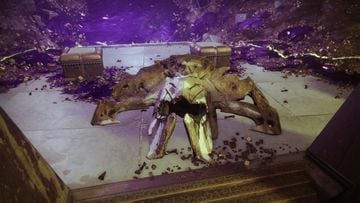 The Crown of Sorrow

The Crown of Sorrow is a Hive artifact which uses Darkness to psionically connect the wearer's mind to those of all nearby Hive, along with granting them access to Hive magics and arcana. It was originally created by the Hive God Savathûn, the Witch-Queen as part of a trap for the exiled Cabal Emperor Calus, and has since been repurposed by Calus and his Loyalists into a means of communing with the Witness, and then by Eris Morn as a way to trap the essence of Nightmares.

"Gahlran believed the Crown made the Hive his. Now he is [mine]."
— The Witch, Insidious.

The crown was first left on a stray War moon,[1] which was claimed as an athenaeum world by Calus' Loyalist Cabal.[2] It was then located by Katabasis, a Hunter-turned Shadow who helped find the crown and delivered it to the former emperor.[3]

When it was delivered, the Psions studying the crown guessed that it was crafted in imitation of the Taken King's power to compel wills.[1] Upon analysis, however, it was discovered that the crown meant to serve as a surveillance device, feeding all sorts of data to the Witch Queen deep within the Ascendant Plane.[2] Calus, wanting a Shadow to control the Hive imprisoned within the Menagerie,[4] had bred a Ceremonial Bather in the Royal Pools of Leviathan named Gahlran to be strong willed and wear the crown as his anointed Sorrow-Bearer.[5]

Calus met with the newly born Gahlran and had his Psion Councilors present the massive, plated helm to him from above. As they lowered the crown, Gahlran heard a litany of voices shouting down at him from inside the artifact as it slowly descended. Despite his protests, Galhran was forced by the Psions to don the Hive artifact, which would allow his mind to see through a hundred billion Hive eyes throughout the Universe[6] Wearing the crown, however, revealed a more sinister purpose: to subvert the wearer's mind to the Witch Queen's will using Hive glyphs etched into a viral language within the crown's interior.[5]

The Crown would drive the unwilling Gahlran insane as he took control over the imprisoned Hive, creating a Kingdom of Sorrow within the depths of Calus' treasure vaults until his death at the hands of a six-manned fireteam of Guardians, rendering the helm inert without a bearer.[7] It was then recovered by The Guardian after the raid and presented to either Benedict 99-40 or Werner 99-40.[8] While the Crown of Sorrow was back in the Cabal's possession, Calus had his Psions continue to telepathically analyze it for additional traps.[9]

Gahlran's usage of the crown would have an unintended consequence of splitting the seams of reality aboard the Leviathan, forming a tear into the Ascendant Realm at the Tribute Hall.[10]

"I chose Gahlran, and his frailty betrayed us. He was too pure, too alone. Our new guests are neither. A glorious chain of Dark minds. An open mouth for the One in the Darkness, that it may sing in exaltation of my majesty. Greatness recognizes greatness. To invoke the attention of the End, our offer must be great."
— Emperor Calus' address to the crew of the Glykon.

Following the Arrival of the Black Fleet, Calus had his Psion Councilors psychically alter the Crown from its original purpose. Now gilded with gold from the Castellum, the exiled emperor sought to use the Crown on captive, undead Scorn as vessels to commune with the Voice in the Darkness.[11]. This experimentation was subject to repeat failure, with Scorn exposed to the anomaly dying brain death, only one surviving to speak with the voices of many dead [12]. Now with a suitable test subject, Calus introduced mycelial egregore spores to the process of using the Crown.[13] Instead of controlling the mind of the bearer, it would now meld the Scorn's thoughts into a gestalt consciousness and broadcast them across dimensions.[14]

The Crown was shipped aboard the Glykon Volatus along with Calus's scribe Amsot, numerous Psion Councilors and Katabasis in preparation for its grand experiment, which was to happen at the planet-sized Darkness anomaly located where Mars once was. Once the Glykon crossed into the anomaly, the councilors placed their hands on the Crown and focused their cognition through it. They pried open the Scorn's collective synaptic pathways and sewed them into the fabric of the anomaly's memetic sphere. The first communion was initially a failure, as Calus' call was unanswered.[11] Many failed attempts to repeat the communion saw the Crown's golden surface tarnished by Egregore spores, having burrowed its way into the crown's precious metal adornments since the last communion attempt. The final attempt, however, saw the councilors incinerated as the Glykon was pulled beyond the anomaly's event horizon before it impacted and ran adrift between dimensions.[15] Calus could hear the entity's thoughts calling through the Crown of Sorrow, beckoning him to the anomaly in Mercury's absence,[16] before he himself was spirited away.[15]

Katabasis and his Loyalist crew were left behind to fend for themselves against the rampant Scorn as the interior of the Glykon was infested with Egregore spores and constantly shifting within the anomaly. His Psion cohort Qinziq had formulated a plan to return the Glykon back to their reality by severing the Crown's connection to the Scorn. Katabasis, along with Qinziq, Bahr'Toran and fifteen of their soldiers stormed the ship's bridge where they made their last stand against waves of Scorn. Qinzig attemped to sever the connection with the Egregore-infested Crown, only to cry out in agony as she was engulfed in black flames and subsequently perishes on the spot.[17] The remainder of the Loyalists would all die at the hands of the Scorn that last bore the crown, with Katabasis killing his Ghost Gilgamesh before his final death.[18]

The Guardian would locate the Crown of Sorrow in a secret compartment aboard the derelict Glykon after several weeks of expeditions. It was recovered and relocated to the Last City at the behest of Osiris (whom Savathûn, the Witch Queen was posing as at the time).[14] 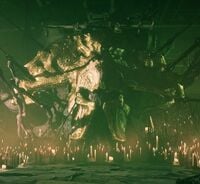 The Crown of Sorrow in the H.E.L.M.

"The Crown of Sorrow was once forged by Savathûn's hand, designed as a psychic prison, binding the mind of its bearer to her will. Now it serves a new witch."
— Eris Morn after her binding ritual.

After the Leviathan returned in the orbit of the Moon, the Crown of Sorrow was employed in the operations to disrupt Calus. Eris managed to sneak the Crown onboard the H.E.L.M. using a Hive Tombship, and around its docking area on the H.E.L.M. the Quarantine Wing was established. Eris would use the Crown as part of the binding ritual for Zavala, Crow and Caiatl, creating the Nightmare Harvester, to aid them in combating the Nightmares that had been drawn to the Derelict Leviathan. Further, she used the Crown in the Guardians' Nightmare Harvests, providing it as a physical prison for the Nightmares the Guardians reap aboard the Leviathan. During the course of the operations, she would use the Crown to communicate with the Guardian and provide mission updates.