The Spider's Crime Syndicate is a Fallen criminal enterprise led by The Spider that resides within the Tangled Shore. It is currently working in tandem with the Guardians to fight back against the Scorn within the Reef. 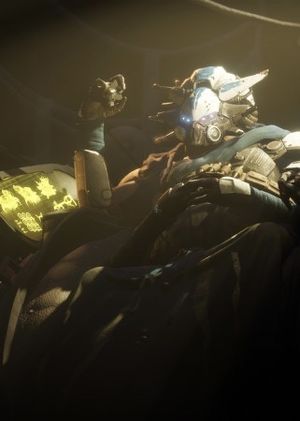 The Spider, Leader of the Syndicate

"You took my warm hospitality and stomped all over it like an ungrateful child. Is that any way to treat one of your dear 'brethren'?"
— The Spider to Siviks

At some point, the mob had a major dispute whereby the Spider and his brother, Siviks, disagreed over having Human allies. This led to Siviks spitting at the face of the Spider as he was taken away for imprisonment by the Spider's men.

The Spider's growing influence helped him control the Tangled Shore up until the Scorn began its civil war with the noble houses. Later the Spider made a deal with Queen Mara Sov to protect the Dreaming City in return for her overlooking his activities in the Shore. 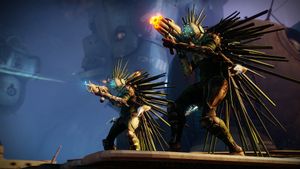 "Divide. Conquer. Isolate Uldren. He'll wind up at your feet. And all you have to do... is pull the trigger."
— The Spider.

Slowly but surely, the Guardian takes out the Scorn's forces bit-by-bit and soon discover each Baron had plans for when they would be done with the Reef. The Guardians succeed in killing Araskes, the Trickster, Yaviks, the Rider and Kaniks, the Mad Bomber.

Within the fields of the Tangled Shore, the Guardian finds remains of Servitors, completely drained of their ether. The Spider takes this as evidence that Reksis Vahn, the Hangman, a Scorn Baron with a hatred for Servitors, is nearby. Following a trail of ether to Quitter's Well, the Guardians encounter the Hangman within his lair and slay the sadistic Baron.

With another tip from the Spider, the Guardian searched for Hiraks, the Mindbender, a Scorn Baron with a morbid fascination for the Hive. The search for Hiraks takes them to a downed Hive Warship from the Taken War, which became a breeding ground for the Hive stranded in the Shore. Fighting past Hive soldiers under the control of Hiraks, the Guardian soon finds a portal rupture that leads to Hiraks' own throne world. Within the Ascendant Plane, the Guardian face off against Hiraks, who is stronger and more powerful within his throne world, but despite his Hive servants and Ascendant powers, they kill the Mindbender which causes his Ascendant Plane to destabilize. The Guardian manages to escape just in time before the Ascendant Plane collapses.

The Scorn's strength and leadership then crumbles to Fikrul, the Fanatic, the Scorn's Archon, and Uldren, the Guardian receives new intel from the Spider who confirms that Uldren and Frikul have been sighted at the Awoken Watchtower, a place which is said to house the Awoken's deepest secrets. Within the structure, Uldren orders Frikul to hold off the enemy while he finishes his work. Gathering their strength, the Spider's main forces engage with the Scorn's defenses in a massive Fallen battle while the Guardian breaches past them and enters the Awoken Watchtower. At the entrance, they face off with Frikul who desires revenge for his fellow Barons. Despite his Dark Ether powers, the Guardian manages to kill Frikul and later execute Uldren for his crimes.

"The House of Dusk, such as it is, hangs on by a thread. I see no material harm to my people if you go ahead and cut them loose, my friend."
— The Spider

At a later date, the Guardians maintained vigilance over the Tangled Shore to hunt down any Prison of Elders escapees and provide favors for the Spider to pay off their "debt" to the Fallen Mob. This includes hunting down the Silent Fang, those affiliated with Irxis, Wolf Baroness and Beltrik, the Veiled, and Calzar, Scarred Captain, the latter of two the Spider has personal beef with. The Guardians then receive a message from Frikul, apparently back from the grave, issuing a challenge to them to avenge his Scorn Barons. Tracking the Fanatic to the Scorn's original lair, the Guardians battle against Frikul once again and despite his Dark Ether abilities, they slay the Fanatic again but he swears that he will return. In addition, to Frikul, the Guardians deal with remnants of Hiraks Hive brood after agreeing to take it as a favor for the Spider such as Hiraks's Familiar. They discover Hive Knights poisoned with Ether, results of Hiraks's experiments and later encounter the progenitor of the Hive within the Tangled Shore was Hiraks consort, In Anânh, Brood Queen. They manage to corner her and kill the Brood Queen, bringing further stability in Tangled Shore. 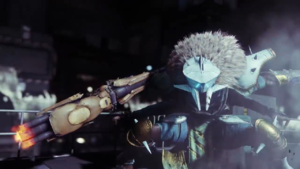 "You… as bad as all Fallen! Worse, even! A friend even to humans… All must die!"
— Siviks to The Spider

The Spider's Syndicate would find itself splintered after a falling out between its leaders. While the Spider's forces maintain their alliance with the Last City, a rogue force, under the command of the Spider's brother, Siviks, grew too ambitious and decided to seize power over the Fallen in the wake of the Scorn's loss of leadership and escaping incarceration at the Prison of Elders, forming his syndicate called the Kell's Scourge. Quickly establishing themselves as the Spider's competition. At first, the Guardians did not notice Siviks until he and his group stole valuable advanced technology from the secret weapons foundry, the Black Armory, which granted Siviks the power he needed to establish his power base and allowing him to gain the allegiance of deserting House of Dusk Fallen. However, news of their theft of the Black Armory and pushing into the Spider's territory reached the Last City. As a result, the Armory's curator, Ada-1, formed an alliance with the Guardians and the Spider to end the threat of Siviks and the Kell's Scourge before they steal any more of her armory's weapons and cause irreparable damage.

After defeating several forces of Fallen in the EDZ on Earth, an intercepted signal revealed that Siviks's was on Nessus. The Guardians located the Scourge leader at The Conflux alongside Telksis the Pillager, but escapes and leaves Telksis to defend the Black Armory caches but the Pillager's efforts were in vain. The Guardians were then able to eliminate Serekis-9, Kell's Scourge who guarded the Gofannon Forge and then dispose of Zevious-3, Forge Warden, thereby securing the Black Armory's forges before the Kell's Scourge could use them. In their failure to capture the forges, the Scourge establish a secret hideout in The Last City's outer abandoned sectors and proceed to target the Black Armory vault, aiming to pillage it but the Guardians catch up and proceed to thwart their efforts. There, the biggest Fallen attack on the City since the Twilight Gap would begin, the Scourge of the Past Raid. To ensure their victory, the Scourge utilize a terrifying, enormous war machine named Insurrection Prime to breach the vault and destroy the Guardians. Insurrection Prime would become on of the most powerful Prime Servitors ever encountered by the Guardians, rivaling Aksis, Archon Prime himself in sheer power.

After an immense, chaotic battle that reduces to ruin, the forces of the City succeed in destroying Sivik's army and his Prime Servitor monstrosity, saving the Black Armory Vault from falling into the wrong hands.

Later on, the Guardians finally manage to track down and confront Siviks himself in the Niobe Labs where the mad leader aimed to capture the Izanagi's Burden to unlock the Obsidian Accelerator and use its ability to become a walking mobile forge which would've heavily upgraded Fallen weapon and armory. Despite Siviks using the labs defense protocols to his advantage, the Guardians were able to best his defenses and Fallen reinforcements. Siviks then releases The Black Recluse to protect the final forge, named precisely to mock the Spider, but is thwarted by the Guardians. In a final standoff Siviks, the Spider's mad brother, is put to an end, helping Ada-1 and the City and reclaim the Black Armory's secrets and technology. Thus, the Kell's Scourge is left leaderless and utterly crippled.

The Spider's syndicate appears to be loosely organized. He rejects any notion of being a Kell and is an astonishingly generous employer by Fallen standards. The loyalty of his permanent "employees" is ensured by his daily payments of Ether: one kilogram for one day's work, including days spent recovering from injury. The custom of freelance scavengers and spies is ensured by the high prices he pays for their goods. In his eyes, employees and freelancers both are simply making a deal with him: as long as they uphold their side of it, he'll uphold his. [1]

The syndicate includes many Servitors. How their loyalty is maintained is not mentioned.

Even non-Fallen can find employment in the syndicate if they have the right skills. The Spider had at least one contact in Dead Orbit, Howe, routing him supplies from City shipping manifests, who he later had killed for asking too many questions.[2] Koro, an Awoken who maintained a number of telescopes for him, received not only payment but transportation and protection.[3] The Spider's Palace in particular was a haven for outlaws and renegades of all sorts, ranging from Fallen (including at least one Devil Splicer), humans, Awoken, and Cabal deserters. [4]