From Destinypedia, the Destiny wiki
(Redirected from Auto rifle)
Jump to: navigation, search

There is more information available on this subject at Auto Rifle on the English Wikipedia. 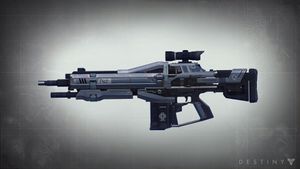 An example of an auto rifle

"A Guardian can't ask for a more reliable ally than an Auto Rifle. Keep it steady and it'll always bring you home."
— Commander Zavala

An Auto Rifle is a class of primary weapons featured in Destiny. All-purpose weapons,[1] auto rifles are magazine-fed weapons that, as their name suggests, automatically removes the spent cartridge case, cocks the rifle, loads a new cartridge, and fires again repeatedly as long as the trigger is held down, or until the magazine is exhausted. Auto rifles are distinguished from scout and pulse rifles in their ability to fire constantly once the trigger is pulled without the need for special perks.[2]