From Destinypedia, the Destiny wiki
(Redirected from House Winter)
Jump to: navigation, search

"Their greed is as much a threat as their blades."
— Commander Zavala[1]

The House of Winter are a house of the Fallen, distinguishable by their angled pale blue cloaks and white armors.

"House Winter, from the ruins of Caracas. Were they there at the Collapse?!"
— Master Rahool

Prior to arriving in the Solar System, the House of Winter was one of many Fallen Houses struggling to survive in the wake of a cataclysmic event known as The Whirlwind. In the aftermath of the fall, Winter were said to have warred with the House of Scar.[2] There is evidence they were present at Caracas during the Collapse.[3] They settled in on Venus, showing interest in The Archive of the Ishtar Academy, seeking to plunder the Golden Age technology within, as well as towards the nearby Vex Citadel.[4]

"Draksis was a thorn in the City's side during the Twilight Gap. Whether it's for the City or the Reef, taking him out seems like a good strategic move."
— Ghost

Years later, when the Kell of Kings sent out the call to attack the City, Draksis, the Kell of Winter, answered, uniting with the House of Devils and Kings. In the ensuing carnage that was the Twilight Gap, the united Fallen were smashed against the City walls and forced into retreat.[5] Reeling from the conflict, Winter once again was forced into scavenging Venusian ruins and coming into conflict with the Vex. It is believed that some time after the Gap, Winter's Servitor God, Simiks Prime was destroyed, though proof of its demise remains elusive.[6] Draksis continued to war against the city, raiding jump-ship convoys using guerrilla tactics, causing Cayde-6 of the vanguard to personally raise the bounty on him.[7]

"Draksis... The architect of Winter's strategy. And he still shows his strength on the front line."
— Commander Zavala

Winter staged an assault on The Archive, attempting to plunder Golden Age secrets from the Ishtar Facility. The attack was lead by Grayliks, Winter Baron and further supported by Simiks-3, a Winter Servitor of significance.[8] The raid was thwarted by Guardians however, who destroyed Simiks-3 and killed Grayliks, securing The Archive for The City.[9] Sometime thereafter, the Vanguard received word that Wintership Simiks-Fel was on the surface of Venus and began a mission to assassinate Draksis. Fighting through Draksis' Kell's Guard, a Guardian made their way onto the Fallen Ketch and faced Draksis in his throne room, killing him and beheading Winter's Leadership.[10] Afterward, perhaps as an attempt to replace Draksis, Winter enlisted Taniks, the Scarred to break into the Prison of Elders and retrieve Aksor, Archon Priest. However a fireteam of Guardians quickly end him and the Fallen which broke him out, leaving them leaderless.[11] 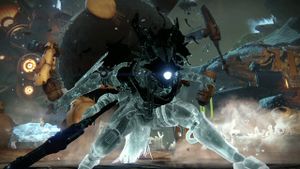 "The Wolves are led by Skolas, the last of their Kells. He wants control of another Fallen House, the House of Winter. He'll kill their leaders and take command of their troops."
— Petra Venj

During the Wolf Rebellion, the House of Wolves' rampage across the Solar System, Skolas, Wolf Kell successfully pressed into service the demoralized House and declared himself Kell of Kells.[12] Guardians fought against Winter, salvaging shiplinks from them, in order to track Skolas' movements, leading The Reef to discover his deployment of The Silent Fang to Earth.[13] Winter forces were also present in aiding Skolas to break through the Vault of Glass and capture the Vex technology. They were also found above The Citadel with Wolf forces, but would cease to follow Skolas after he is captured by the Reef and Guardians, and killed in the Prison of Elders, ending the Wolf Rebellion and leaving Winter leaderless once more.[14]

"Was in talks with Baroness to leave her House. Remember, Guardian. There is always farther to fall."
— Variks, the Loyal

Variks at some point was in negotiations with Grayris, Baroness to leave her house, however she would succumb to Oryx's Taken. During the Taken War the House of Winter managed to take advantage of the Reef's disorganization to break into the Prison of Elders and retrieve another Archon Priest. However the Taken on Venus attacked and scattered their forces, Taking the Archon in the process, turning him into Nixis, Hunger of Oryx. Guardians managed to destroy Nixis, ending Winter's second raid on the Prison as poorly as the first. [15]

Shortly before the Guardian's arrival at the tower at the onset of the Red War, the Guardian enountered remnants of the House of Winter in the Reef.[16]

Unlike other Houses, Winter does not seem interested in creating new leadership from within their own ranks after the death of their Kell, Draksis. The extent of the strength of their current leadership as unknown, due to there being no mention of their House Archon, and the rumors of their Prime, Simiks Prime, being destroyed.[17] They have made two attempts to recruit outside nobility to join their house, both former Archon Priests, with unknown intentions for their new roles within Winter.[18] In addition, they were the only Fallen House that chose to follow Skolas during the Wolf Rebellion.[19] 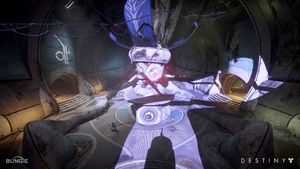