"When fire blooms from long-dormant steel, it heralds the rise of the Black Armory."
— Ada-1

The Gofannon Forge is one of the four Black Armory forges. It is located in the Lost Fuselage on Nessus amongst crashed wreckage from the Exodus Black. Fallen from the Kell's Scourge have seized control of it and placed Zevious-3, Forge Warden in charge of the device.

Inspired by the House of Meyrin and their French roots, the Gofannon Forge specializes in crafting precision-based weapons, including the Tatara Gaze Sniper Rifle and the Kindled Orchid Hand Cannon.

As in the other Forges, the main goal of the activity is to throw Radiant Batteries at the central Forge until it is charged. The activity is split into three phases: two phases titled "Charge the forge", and a final, boss phase titled "Defeat the Forge Warden". Both charging phases have a timer which initially begins at one minute, whereas the final phase begins at two minutes. The timer can be increased by defeating Phased and other enemies, where Elite enemies provide 4 seconds and Major enemies provide 10 seconds upon death.

During the first phase of the activity, the Forge accepts Radiant Batteries through any part of its hitbox. Elite Phased Dregs will spawn alongside regular Dregs and Exploder Shanks at specific locations in the map. Killing these special enemies will drop one Battery. Occasionally, a Major Phased Captain will spawn, who will drop two Batteries upon death.

An Arc weapon is useful for this phase, as it allows the aforementioned Captain's shield to be broken quickly. It can be beneficial to target the Exploder Shanks first, to avoid being overwhelmed later on.

Once 20 Batteries have been thrown at the Forge, the second phase starts with an initial timer of one minute. The hitbox of the Forge changes: the three arms open slightly, and only the glowing main body will accept Batteries. Initially, swarms of Overcharge Shanks will spawn around the map, casting an electric field around themselves which inflicts low, but constant damage and provides the Shock debuff. Phased Tracer Shanks will also spawn alongside the occasional Servitor and Vandals. They will drop one Battery when killed. Major Phased Heavy Shanks will also spawn, which will drop two Batteries.

It is efficient to initially have the Fireteam spread out to watch the spawning of the first wave of Overcharge Shanks and quickly destroy them as the Shock debuff forbids the use of secondary jump abilities and sprinting. Health recovery may be strongly impacted due to the high damage output of the Tracer and the disruption of Overcharge Shanks, so methods of quickly restoring health are advisable. The high number of enemies without critical damage spots for this phase will make weapon types such as submachine guns and shotguns preferable.

When throwing the Batteries, aiming for the inner side of the arms, closer to the body of the Forge can be consistent when the latter is not in full view. 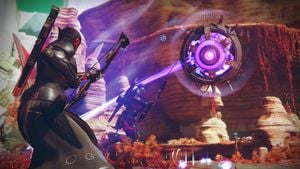 After the first two phases are complete, Zevious-3, Forge Warden will spawn close to the Forge. The Warden is protected by drones which must be destroyed in order to deal damage to the boss. It will immediately begin firing explosive projectiles at the nearest player and occasionally teleport away to a different location. The Warden will also use the Servitor's Grasp ability to teleport players to a random location, in turn providing them with an overshield. Vandals and Servitors will also spawn to assist the Warden. Upon defeating it, the Forge drops rewards and the activity ends.

Having the Fireteam deal damage from a single side can be efficient as the Warden will aim its critical damage spot at the nearest player. Some distance should be kept from the boss as it will release pulses of damage if a player is too close. The Servitors protecting the Warden may make it invulnerable and vice-versa, halting damage and wasting time.