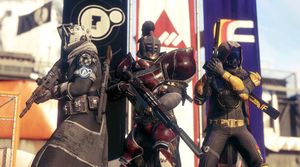 Faction Rallies were a week-long community activity introduced in Destiny 2. They were removed from the game and Luke Smith confirmed in his Directors Cut for 2019, that Faction Rallies will no longer happen and they Bungie has no plans on adding them back. [1]

During a Faction Rally, players could pledge themselves to one of the Last City's three Consensus factions: Dead Orbit, Future War Cult, and New Monarchy. This pledge lasted for the duration of the event and could not be changed until the next Rally occurred.

The objective was to collect as many faction tokens as possible during the event by participating in various activities, including Strikes, Crucible matches, Raids, Public Events, destroying supply crates in Lost Sectors, and completing the faction's daily milestone. These tokens were exchanged with the faction representatives Arach Jalaal, Lakshmi-2, and Executor Hideo in the Tower to acquire faction-themed gear. When the Rally would end, the faction that amassed the most tokens across all of its pledged players is would be declared the winner.

Arach Jalaal, Lakshimi-2, and Executor Hideo served as the representatives and vendors for each faction. During the week of the Rally, they would allow players to pledge to their faction and would offer exclusive gear in exchange for tokens. When the Rally ended, the representative of the winning faction will sell the reward weapon for one week afterwards. All representatives would also continue to accept any unredeemed tokens for that week; if tokens were not redeemed before the next weekly reset, they would be removed from the player's inventory without compensation.

For the duration of a rally, between one and four destructible, explosive supply crates will also appear in Lost Sectors across the Solar System. Destroying these crates grants one faction token apiece.

For the duration of the Rally, Patrol spaces feature an additional Public Event-like activity; this event does not contribute to the Flashpoint milestone or count as a Public Event completion. The Red Legion or House of Dusk will drop four supply crates which will be guarded by standard troops and Retrieval Specialist Incendiors or Stealth Tracker Marauders. Capture each crate to earn a faction token. Once three out of four crates are captured, a Quartermaster Colossus or Vendetta Shank Heavy Shank will arrive to defend the fourth crate. After all crates are captured, a loot chest will appear with Public Event-level rewards.

At the end of Season 3 in Destiny 2, big changes started to arrive. Bungie announced that Faction Rallies would be pulled out of the game, to be reevaluated. Faction Tokens became unredeemable, and Exotic Catalysts that required event participation were moved to other activities. In a 2020 video, Luke Smith announced that faction rallies would be removed from the game, as "the reward gear hasn't been used that much, our character cast is growing too large, and crucially, they didn't drive a bunch of engagement with the game." Rally-specific gear was added to the world loot pool in the Season of the Worthy, while Lakshmi-2 and Executor Hideo were removed from the Tower as of Shadowkeep.