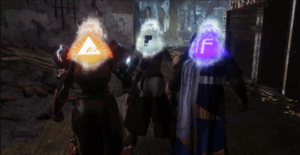 Renown on display. Each Guardian is pledged to a separate faction.

Renown is a gameplay mechanic introduced in Destiny 2 during the first Faction Rally of season 3[1]. Designed to challenge players with a unique experience rather than simply reward them, renown acts as high risk, high reward system to build interest in achieving faction-based goals and completing various activities in Patrol Zones. These activities can range from Public Events, to completing Lost Sectors, and eliminating powerful enemies.

Visually, as a player gains reputation with their desired faction, a sigil representing their alignment may be seen when entering third-person view. The level of reputation the player presently has is shown as small balls of fire that appear in numbers of one to four, until finally engulfing the faction's insignia when level five has been reached.

After pledging to a faction of their choice and deploying to a Patrol Zone, the player will accumulate renown through a handful of ways. Stacking up to five, players will notice a slowed rate of health regeneration, reduction to their own damage output, and vulnerability increase from the damage of their enemies. Restorative Light comes back into play, and works similarly to its function with the Attrition multiplier from the Strikes playlist; As enemies are defeated, they will have a chance to drop a fount of light that will restore the player's health. As the number of stacks increases, the chance for Restorative Light to drop from a fallen enemy decreases. Players can keep track of their reputation through a metre seen on the bottom left corner of their screen[2].

Renown is gathered only in Patrol areas. Through a variety of means, the player can acquire the double-edged modifier. As the difficulty increases, so to do the amount of tokens they receive from their chosen faction. The methods of auccumulation are listed below[3]:

Thankfully, the renown buff is impermanent. Players will lose renown if they've been killed by the enemies of the Light, losing one level of reputation per death. Players who are more careful and manage to complete a Lost Sector with any level of renown can cash in their stacks, and are rewarded with a sum of faction tokens correlating to the amount of renown they have. This also eliminates all renown the player is burdened with, allowing for a fresh start. Players interested in retaining their renown will take care not to fast travel while under the influence of the buff, as doing so will remove any amount of stacks[4]. Fast-travelling within a Patrol zone will also eliminate all stacks when commenced.