The enemies of humanity are innumerable. We are surrounded by the Fallen, the Vex, the Hive, the Taken, the Scorn, and the Cabal. But never before have we faced an enemy as powerful as the Shadowkeepers – a villainous organization designed to overthrow entire worlds. — In-game Description

The Swordsmen of Vengeance (also known as Shadowkeepers) are a faction of rogue, vengeful Guardians who seek to enact their revenge on Auradon for helping Maleficent kill Mal. They are the main enemy faction of Paradox.

Before Mal's parents Hendrick Yor and Kaguya Narusaka were killed by Maleficent, they created the Shadow Crystals, along with Mal's birthright jewel, known as the Crystal of Memory, which they attached onto her necklace in order that she can continue their legacy. At the same time, Narusaka Kazuto was adopted by his aunt and uncle a year after his birth, when his biological parents died in an accident. Raised by his foster parents as a son, Kazuto was originally forced to train with his cousin in the neighborhood kendo dojo; however due to his aunt's influence as an editor for a computer systems magazine, Kazuto became more interested in computers and dropped kendo after two years. This decision earned him a heavy beating from his grandfather, prompting Suguha to defend him by promising to practice enough for both of them. At the age of ten, Kazuto discovered that he was adopted from erased Juki Net records and since then unintentionally began distancing himself from Suguha. When he discovered the Crystal of Wrath, he meets a mysterious stranger named Evangelion, who tells him that his darkness was just the beginning.

A few decades later, after he woke up from a coma, he and Asuna reunited with their friends, but the reunion was interrupted when the members of Laughing Coffin, the Integrity Knights, and their old enemies launched an attack on Rath, killing Suguha Kirigaya, Ryoutarou Tsuboi, Andrew Gilbert Mills, Keiko Ayano, Shino Asada, and Rika Shinozaki. Kazuto and Asuna attempt to attack them, but are suddenly injured. Just when they were about to kill Asuna, Kazuto lets off a dark aura and goes berserk, killing all of them before healing Asuna. Later on, they meet Evangelion, who tells them that the time has come for them to avenge their families and friends.

At some point during the events of Warmind, Kazuto and Asuna traveled back in time and recruited time remnants of Eobard Thawne, Malcolm Merlyn, Ruby Hale, Uldren Sov, Fikrul, and Sasuke Uchiha to help them undo what the heroes had done to them. Capitalizing on the growing desire for blood in Tokyo, they, along with the other members, formed a group, collectively titling themselves the "Shadowkeepers." After they banded together, they waged a civil war against various multiverses for abandoning Mal's cry for help and terrorized many settlements within Earth, degrading the once prosperous civilization into a lawless frontier. The terror they unleashed had almost grown as powerful as any Kell even having driven the Freedom Fighters to extinction through the destruction of all their allies. They even helped the Scorn successfully take control of a local Hive brood when Hiraks, the Mindbender took In Anânh, Brood Queen as his consort.

Prior to the events of Descendants 2, Kazuto and Asuna met Zevon in the Isle of the Lost, where they recruit him into the Shadowkeepers, explaining that they can help him manipulate Mal into joining them so that she can kill Maleficent and take over Auradon. Three years later, during the events of Shadowkeep, the Shadowkeepers, led by Kazuto and Asuna, break into Auradon, where they slip a potion, to which Mal touches it and becomes evil, all while killing off Maleficent. By the time Mal became conscious again, she becomes corrupted by Kazuto, who reveals his plan for world domination. When the Guardian and Zavala arrived at Auradon, Fikrul and Uldren rally the Scorn, all of whom helped kill Prince Philip and Princess Aurora. At the same time, the Guardian encounters Mal, who suddenly kills Freddie Facilier and Evie while being possessed by the birthright jewel; Zavala attempts to stop her, but is suddenly cornered by Kazuto, who incinerates Zavala's Ghost with a Scorn pistol before killing Zavala with his own weapon, the Origin Story, and fleeing with his other weapon, An Answering Chord. After this encounter, they transformed the Auradon Prep students into a bloodthirsty faction titled the "Ghosts of Nagasaki." During this time, Mal grabs hold of a now-Taken Dragon's Eye scepter and helps them remake Auradon in their own image.

"To fulfill my family's destiny! To rule an empire. Auradon will be mine!" — Zevon

Damien Darhk is now the mayor of Star City and restored his original magic powers. He killed all the various vigilantes of Star City and Central City, plus Quentin Lance, Sara Lance, Felicity Smoak, and Amaya Jiwe, to which he kept their respective masks and helmets as trophies alongside Green Arrow, the Flash, Ragman, Wild Dog, Black Canary, Spartan, and Vigilante's respective mementoes.

Malcolm Merlyn has it so that his wife and son are both alive and in good spirits, and Thea is also a part of his family and now adores instead of hates him. He brings back his previous fortune and resources, both as CEO of Merlyn Global Group and leader of the League of Assassins. To which with the latter, he has Nyssa al Ghul living a closeted and miserable life in Ohio. He even restored his severed hand.

Eobard Thawne was now Mayor of Central City and the owner of S.T.A.R. Labs and had considerable resources and influence. Wanting status and fame, he would use his genius and company to solve various problems of the world, to which he gained various awards and influence on the world, even becoming personal friends with the President of the United States. He had the demonic speedster chasing him as his personal pet prisoner who constantly struggled to get free of his cell.

At some point, Mal and Zevon have a daughter named Alina.

"A notorious weapon that has now wrapped itself with aspects of what remained of Auradon, it bears three diabolical words: Long live evil."
These weapons can be acquired by defeating the Shadowkeepers in High Orbit. 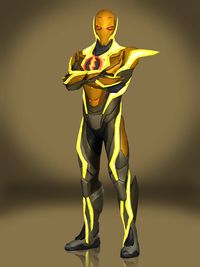 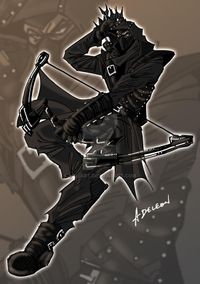 Kazuto wields the ability to control a twisted army of vile Auradonian corruptions known as the Ghosts of Nagasaki. These new enemies have been wholly consumed, possessed by the Darkness, bodies and mind twisted into service of their leader. Now, they are bent to a singular purpose – our eradication. — In-game Description

Corrupted by Phoenixaro Uchihamaki with Dark Ether and SIVA, these new enemies have armed themselves with some of the most deadliest arsenal the Vanguard had ever heard of. Confront the Reborn Army in the Shadowdrifter and contain the infection. — In-game Description

A ruthless gang of barbarous thugs led by Penny Peabody and Malachai and one of the most notorious gangs hired by Kazuto and Hiram, they deal in drugs and street race for sport. They are also rumored to have committed various acts of murder against many enslaved Auradonians during the Shadowkeepers' takeover. — In-game Description