"This ability to travel through time revealed the truth. My fate was to become your greatest enemy. I was never going to be the Flash. So I became the reverse of everything that you were. The more people you saved, the more you were loved... the more I had to take from you.."
— Eobard Thawne

Eobard Thawne is the member of the Shadowkeepers and the main antagonist of Destiny 2: Paradox. 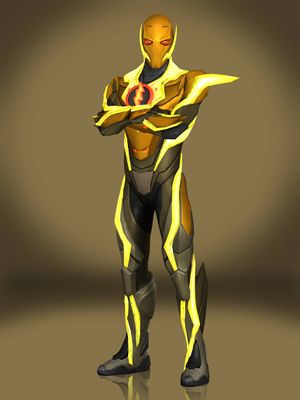 Professor Eobard Thawne (born c. 2151), also known as the Reverse-Flash, is a meta-human speedster from the twenty-second century, a descendant of the late Eddie Thawne, a time criminal, and the archenemy of Barry Allen/The Flash. Obsessed with the twenty-first century's Flash, Eobard recreated the accident that was behind the Flash's powers, becoming a speedster himself. However, after his very first trip back in time, Eobard learned that he was destined to become the Flash's archenemy and grew to despise the hero, attempting to prove his superiority as the Reverse-Flash and therefore became the opposite of his former idol. At some point after that, in his desire to be the complete opposite of the Flash, Eobard created his own negative variation of the Speed Force using negative energy and emotions, which he called the Negative Speed Force. He used this to travel through time without the Flash being able to detect him. Since then, the two speedsters battled each other for many years, but neither of them was strong or fast enough to defeat each other.

After learning the Flash's secret identity, Eobard traveled back in time to kill Barry as a child to erase his foe from existence but was thwarted by the Flash of 2024 who brought the younger Barry to safety. The enraged Eobard then killed Nora Allen and framed Henry Allen for the crime instead, being known as the Man in Yellow after the incident. However, Eobard have his connection to the Speed Force fluctuating, becoming trapped in the early twenty-first century. Realizing Barry was the only way to return to his time, Eobard killed Dr. Harrison Wells in order to assume his identity as the director of S.T.A.R. Labs, and to push through for the creation of a particle accelerator to ensure that Barry would become the Flash. Posing as Wells, Eobard mentored the Flash and became the leader of a team he assembled to stop the meta-human threats, to increase his protégé's speed so that Eobard could use the hero's connection to the Speed Force to return to his own time. After his plan was exposed and subsequently foiled, he was erased from existence after Eddie killed himself to stop him.

One year after Thawne was erased from existence, Barry prevented Eobard from murdering Nora, creating Flashpoint and held captive for months. After realizing this mistake, Barry released Eobard, allowing him to kill Nora again. As a result of being pulled out of the timeline, Eobard was spared from his fate and continued to exist as a time remnant, while his original actions remain intact. Due to his own nullified state of existence being an aberration, he was hunted by the Black Flash, forcing him to seek out the Spear of Destiny in order to restore his natural existence. Unable to find the object and outrun the enforcer at the same time, Eobard formed a supervillain alliance. Eobard and his co-conspirators eventually retrieve the Spear of Destiny, which they use to rewrite reality to their whims. Despite initially succeeding, his plan was foiled by the Legends de-powering the object, and Eobard was vaporized by the Black Flash, being restored to the timeline and his original events as Wells.

Later, Eobard mysteriously resurfarced as an ally of the New Reichsmen of Earth-X. He originally tried to carry out the Fuhrer's request to perform heart surgery on Overgirl. However, when the Reichsmen's defeat eventually became inevitable, he abandoned his allies to their deaths at the hands of the Earth-1 heroes and Supergirl.

By 2049, Eobard was incarcerated in the meta-human wing of Iron Heights and had begun mentoring Nora West-Allen, claiming to be working towards a less villainous legacy, as he is scheduled for execution. However, it is later revealed that Thawne's powers were negated by Cicada's dagger, and that the whole reason he mentored Nora for traveling to the past was to destroy the dagger and free him. After the dagger was destroyed, Thawne was freed, moments before his execution. He briefly fought Nora and Barry before they were distracted, when Nora began to be erased from existence. After the two ran away to enter the Negative Speed Force, at Thawne's fervent suggestion, Eobard made his escape.

Eobard Thawne was born in 2151 into an affluent bloodline of politicians, scientists, and captains of industry. A distinguished member within his own family, his first name "Eobard" is apparently even more distinguished. In his childhood, he was taught astro-navigation in grade school and grew up at a time when cows were extinct. Eobard is also quite knowledgeable of his family's history, knowing of Eddie Thawne despite history having virtually no apparent record of Eddie's existence, considering his ancestor to be a failure within their family. In his adulthood, Eobard became a scientist, eventually joining the academia as a professor and dedicated his life to unlocking the Speed Force's secrets. At some point, he also designed an anti-speedster rifle. He also created or obtained a suit similar to Flash's but with the opposite colors.

In his research into the Speed Force, Eobard learned of The Flash, the Central City superhero of the 21st century, and grew to idolize the Flash and eventually became obsessed with and desired to be the Flash himself. After years of researching, Eobard learned how the Flash gained super-speed powers and recreated the accident that was originally behind the Flash's powers of super speed, resulting in Eobard becoming a meta-human speedster and gaining super speed and the power of time travel through a Speed Force connection. Using his speed abilities, Eobard somehow learned on how to use his powers to travel through time and traveled back to an unknown point in 21st century and eventually learned that he was instead destined to become the "Reverse-Flash", the Flash's greatest enemy and not the Flash himself.

Despising the Flash with every fiber of his being, he made it his life's work to prove his superiority as a speedster, indirectly fulfilling his destiny in the process as he descended into insanity. He vowed that for everyone Flash saved Eobard would kill more, everyone who Flash was loved by, Eobard would take from his former idol. At some point, Eobard, in both his obsession to be the exact opposite of the Flash and to time travel undetected by the Flash, created a Speed Force using negative energy in which he called the Negative Speed Force. At some point during his time-travels, he also obtained possession of Gideon, an artificial intelligence program created by Barry Allen, and began searching various moments throughout history to learn when the Flash was active.