"The Age of Exodus has come to its end! No longer shall we chase a false deity, for we will build a new empire from the bones of humanity! The Age of Emperors is upon us!"
— Atrykis, Emperor Kell

The House of Emperors are a vicious Fallen House, distinguishable by their Blood Red armor and dark gray shoulder capes. Proclaiming themselves as rulers of the Eliksni, they are enemies with The Last City, House of Dusk, House of Lions, and any other Fallen who refuse to bow to their will.

"(Sigh)...Another day, another House I ticked off, Man I should've thought this idea of joining you guys clearly."
— Joskaa

In the months following the conclusion of the SIVA Crisis and sometime prior to the Red War, Atrykis, once a House of Lions Baron, became obsessed with restoring the Eliksni back to their pre-whirlwind state. After expressing his hatred towards The Last City and the Traveler, he attempted a rebellion against the Joskaa, the Kell of Lions, with the help of his loyalists and some deserters from the House of Gray. However, his revolution was promptly extinguished, and he, along with his remaining followers, were sentenced to the Kell's Dungeon. But, thanks to the efforts of his closest allies, Atrykis was able to break out of prison, and defect from any dens or hideouts belonging to Lions, to avoid the Kell's Wrath.

Atrykis's group eventually found their way to Enceladus, where hidden Fallen remnants from various houses, including the Devils, Gray, Wolves, and Kings were hiding out in an abandoned Golden Age ruin. After conquering their hidden fortress, Atrykis formed the House of Emperors from his inner circle, as well as the remnants of those Houses, and named himself as the Kell of Emperors. The House then began their hidden crusades of stealth raids and scavenging parties, hoping to accumulate as many resources and technology as possible.

The Enceladean fortress was then renamed into the Valley of the Emperors, and it was here that the Emperors has began to build up in strength. Unfortunately, due to their small strength and presence, the Emperors were refrained from any direct engagements with the City, Red Legion, and House of Dusk, but occasionally engaging patrols on Enceladus. However, thanks to some of the Devil Splicers defecting, the Emperors were able to get their hands on SIVA, but only in limited quantities due to the destruction of Site 6. Until more SIVA could be produced, the nanites were reserved only for the highest members of the Emperor Splicers.

As imposed by Atrykis and his Archon, Egroskyk, Servitors were no longer revered or worshipped as gods, merely tools to produce Ether. Efforts were also made to obtain Human, Cabal, Awoken, and other different forms of technology. Egroskyk also, at several points, attempted to experiment with Hive technology, but failed.

After the death of Dominus Ghaul and the fragmentation of the Red Legion, the Emperors took advantage and drove the Red Legion off of Enceladus. With the House of Dusk also loosing most of their leadership, many of their forces were assimilated into the newfound House. As the Emperors expanded, Atrykis began to set his sights towards the inner system, more specifically on Earth where he would further expand his new Empire. 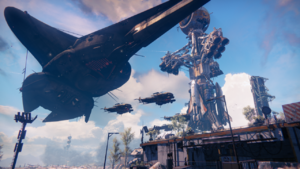 The Emperors arriving at the ruins of Colorado

"Behold, the Colorado Badlands! No longer must we hide in the outskirts of a dead system! Atop of these desolate ruins, we shall build our new empire from the ground up!"
— Atrykis broadcasting to his followers

Almost a year later, the Emperors had set their sights on new territory, the ruins of what used to be the Old Earth state of Colorado, which at the time was home to a Golden Age Shipyard, with a few remnant colony ships as well as some remnant Cabal and Hive. The Emperors settled in the ruins of Denver, where they begun to transform the abandoned city into their new lair. At the center of the city, the Imperial Citadel was built into a cluster of skyscrapers. The Emperor, Archon, Prime Servitor, and Imperial Court moved in, along with many members of the Emperors.

The Emperors had also set their sights on the Reef, where they had learned of a three way war between Eliksni, Last City Guardians, and the newly arrived Scorn. It was this conflict that the Emperors took advantage of to slip their Ketches and much of their fleet through the Belt undetected. However, a few scavengers raided the Reef discretely, avoiding the likes of the Tangled Shore where most of the conflict took place.

Though the Emperors made no appearance around this time, intercepted transmissions show that Atrykis came in contact with Seriviks and her Syndicate. The Emperors were planning on sending emissaries to negotiate a possible alliance between the two factions. However, when she was killed by The Last City Guardians, their plans were called off. However, some of the Syndicate's members were eventually recruited into the Emperors.

Somewhere around this time, Atrykis and Egroskyk began the construction of the Void Array, a massive superweapon which they planed to mount on a Ketch and fire upon the Traveler and the Last City. Syndri was also unleashed around this time, first seen assaulting Red Legion forces in Old Chicago

"Why must we wait? The City cowers from these Pyramids. We should strike now!"
"Patience, my dearest. There will be a time to strike. We do not stand a chance against these Pyramids. Let our enemies war amongst eachother. And when the smoke lifts, we shall pillage the survivors."
— Akildis and Atrykis discussing the Arrival.

Following the arrival of the Pyramids in the Solar System, the House of Emperors were amongst the first to know. Thankfully, by the time the first Pyramid arrived at Io, most of the Emperors had retreated to their new lair on Earth, in the Colorado Badlands, though a token force did remain behind in the Valley of the Emperors back on Enceladus. Though the Emperors did launch minor raids on City, Cabal, and Fallen forces alike, they remained mostly obscure and off the radar, avoiding the Pyramids as much as possible.

The Emperors eventually made their presence known, raiding a secret supply exchange between The Last City and the House of Lions within the vicinity of the Twilight Gap in an attempt to devastate the leadership of both factions. Thankfully, the Emperors were stopped, but soon enough, their efforts to take over The Reef became known when the Emperors assaulted the Lions' Run. The Guardian was sent to help the Lions retake their lair, where they came across Syndri, a genetically engineered Infused Fallen who damaged the Lions' Run greatly and escaped. With the Emperors driven from the Reef, the Vanguard and the Lions would joined forces once again, in an attempt to located and stop the Emperors before they launch a full fledged assault on The Last City.

The Lions and the Guardian were then approached by Vrylzesk, the Illustrious, a former Lion Enforcer who revealed the Emperors' stronghold in the remnants of Colorado. In a joint effort, the Guardian lead the Lions on an invasion of the Colorado Badlands, where they established a small outpost on the outskirts of Denver. Both the Lions and Vrylzesk tasked the guardians with several missions to drive out the Emperors. However, this invasion also startled a secret sect of Hive who were initally driven out of the city by the Emperors and back to their Seeder Ships. This lead into a three way war within the Colorado Badlands.

Some time after the events of Beyond Light and The Witch Queen, the House of Emperors came under attack by the Shadowkeepers. Led by Kirito and Asuna, they massacred countless Fallen who remained loyal to their Kell and spared those who cast off the House to serve them.

The Emperors maintain a similar structure to most Fallen houses, having a Kell, an Archon, and a Prime Servitor. However, in similar fashion to the House of Lions, they also have a female second-in-command, referred to as the Baron Empress, or just Empress. Though not officially stated to be a Fallen Queen, the holder of this position acts near identically. Servitors in the Emperors are not seen as Gods or companions, but as tools, and are promptly programed as such.

The Imperial Court, an Emperor exclusive group, consists of at least 12 veteran Barons close to the Emperor that carry out his will and judge the accused. Their Court Arbiters function similar to the Wolf Enforcers, enforcing loyalty throughout the House and bringing in any criminals for trial.

The Emperor Splicers function similarly to the Devil Splicers, though due to a shortage of SIVA, they do not venerate it as their predecessors, and also focus more on engineering other Fallen and Cabal technology. The Imperius Mecha are a splinter group of the Splicers that focus on the Emperors' Shanks, Walkers, and other robotics. Both groups are lead by the Archon.

The Emperor's Guard are elite variants of genetically modified Kell's Guards that consist of the Emperor's strongest guardsman, many of them SIVA modified and brainwashed in similar fashion to the Wolves' Guard. They vehemently guard the Emperor's Kell and Citadel from any and all threats. The Emperor's Hand is an elite sect of the Guard, consisting Atrykis's closest allies, most of which are former Lion members that served Atrykis during his attempted revolt.