"There's more to being a Titan than headbutting everything in sight, but it sure is fun."
— Brayden

Brayden is an Human Titan and former Warlord. He once ruled over the Appalachian Dead Zone before joining The Last City. He is the leader of his own Titan Order, the Eternal Brotherhood, and works closely with Vrylzesk's House of Emperors 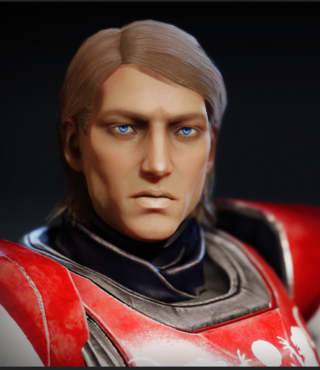 Brayden beneath his helm

"The past is in the past, though sometimes, I can't help but wonder who I used to be."
— Brayden on the topic of his past

Brayden never cared much for his distant past, and so he never bothered to look into it much. All that is known is that in his previous life, he was at one point enlisted in the Seven Seraphs. His Seventh Seraph Officer Revolver and CQC-12 are all that remains of his past in that regard. Some journals suggest he once had a home in Freehold on Mars, and may have even been born there. He had distant memories of a wife who served in the Cassini. For unknown reasons, he was present at Pittsburgh during The Collapse and eventually perished there.

"Back then, we didn't have a Last City, Vanguard, or even Iron Lords. We were on our own, with no guidance."
— Freya reminiscing on old history

During the Dark Age, Brayden was revived by the ghost Freya while inside of a helicopter. The two spent the first few years together roaming around Appalachia, surviving against Fallen, wildlife, and other threats. He recalls being brought back to life multiple times in those years, not even remembering how he died. Eventually, outside the ruins of Roanoke, Brayden and Freya encountered the leader of the Fallen in Appalachia, a vicious Fallen Kell known as the Kell of Blades. Disgusted by the Kell's enslavement of human settlements, Brayden encountered the Kell of Blades, killed him in combat, and drove the Fallen out of the Appalachian Dead Zone. There, he reigned as the benevolent, but repressive Warlord over all human settlements in the ADZ.

A few years into his rule, Brayden's regime came under threat by fellow Warlord Hestia, who was operating out of the ruins of Brimingham. Hestia had been expanding northwards for some time and had finally reached Brayden's domain. Rather than send his forces in mass, the Risen Warlord decided to challenge Hestia to a duel, which she accepted. Though the fight was brutal, and nearly costed Brayden his life, he emerged victorious, managing to overpower his enemy and snap Hestia's neck. He claimed her Greatsword, which he named The Sovereign's Wrath.

A while later, Appalachia was suffering from a great famine. Many people were suffering from harsh weather and a food shortage, and they demanded their warlord do something of it. Brayden had learned of a camp to the South where the remnants of humanity had banded together, thanks to a merchant. It also came to his attention that the Risen gathered there, known as the Guardians, would most likely track down and execute any remaining warlords, himself no exception. With no other option, Brayden and Freya organized broke down the settlements into a massive convoy and made way for the settlement. The road was long and harsh as the convoy was forced to fight the elements, wildlife, Fallen, and even fellow Warlords. Many perished along the way. However, Brayden inspired the caravan to push on and not give up hope.

Eventually, Brayden reached The Last City, or at least the camp that preceded it. His colony contributed machinery and building supplies to the camp, and Brayden himself gave up the title of Warlord to serve with his Risen bretheren. He worked closely with Zavala, Sloane, Shaxx, Saladin, and other Guardians to construct the City's walls and maintain stability. After the city finished construction, Brayden was approached by the Firebreak Order and joined their ranks.

Some months after his arrival at the City, Brayden fought in the Six Fronts alongside the Order, valiantly defending the City against waves of Fallen. At one point in the battle, Brayden had three of his fingers sliced off during an engagement with a Baron, where he headbutted the Fallen, took their Arc Spear, and drove them off the wall before using the spear to kill 5 more Fallen. Eventually, the battle was won for the Guardians, and Brayden felt proud defending the city he and many others worked so hard to build. After the battle, he ran many ops with a 5 man Fireteam whom he regarded as close friends.

Though his team participated in the Great Disaster, Brayden did not, as he was on patrol in Old Chicago and failed to arrive before their departure. He returned to the tower to find the operation was a complete failure and that none of his allies returned alive. Ashamed of their deaths, Brayden left the Firebreak Order. He forged a replica of the team leader's A Fine Memorial in their honor, and uses it to this day.

Brayden later participated in the Battle of the Twilight Gap under the command of Lord Saladin. He and another Awoken Titan by the name of Cixan Maduhl secured a route for civilians to evacuate the Ridgeback District before joining with Shaxx to drive the Fallen out of the city. After the battle, Cixan Maduhl, impressed by Brayden's zeal, invited the Titan into Fireteam Scythe, which now consisted of 4 members.

During their travels together, Brayden began to have doubts about the Vanguard and the Traveler, and how they were affecting ordinary human citizens. He shared his concerns with the Fireteam, and eventually lead them back to his old fortress in Appalachia. There, under his leadership, Brayden formed the Titan Order known as the Eternal Brotherhood, to protect mankind from any and all threats, whether that be the Darkness, Fallen, or even the Traveler itself. The Brotherhood ran many different missions together during the Eliksni Siege, Taken War, and SIVA Crisis

Several months following the Taken War, Brayden was tasked with patrolling the space around the Dreadnought. However, during the patrol, his Jumpship came under assault by a House of Wolves Skiff. After the dogfight, both ships crashed on Saturn's moon of Enceladus, home to a minor Vex Collective. His ship damaged, Brayden was forced to find spare parts from the Skiff. There, he met the Skiff's sole survivor Esivir, badly wounded. Instead of killing her, the Titan opted to heal the Fallen and together, the two were able to fend off the Vex and repair their vessel.

After they escaped the moon, Brayden was ordered to bring in Esivir for questioning on behalf of the Vanguard. However, Brayden, who had begun to take a liking to his new acquaintance, disobeyed direct orders and dropped her off on Mars instead to reunite with her House. After she thanked him, both of them parted ways, hoping that others, both human and Eliksni alike, can follow in their footsteps.

In the heat of battle Brayden's mind is focused on the task at hand, and whoever he may be fighting. He's generally known to keep his aggression in check, but has been known to loose it on several occasions. Off-duty, however, Brayden is remarkably more laid back and easygoing. On one hand, he's often seen as sympathetic and caring, often offering to help in anyway he can, along with a penchant for befriending others. On the other hand, he does have a noticeably more arrogant, confrontational, and impetuous side, having a hard time at just letting things go and getting easily irritated.

Brayden has a noticeable love for literature and entertainment. He's known to keep quite a few books from the Golden Age, as well as ones from various other sources. His favorite types of books are "high-stakes adventures with fascinating characters and philosophical implications".

Despite having worked with their earliest members at the City's foundation, Brayden has been at odds with the Vanguard ever since its formation. Though he'll work with them for the betterment of humanity, he believes them to be holding Guardians back, and considers them to be impotent. His bitterness only grew after the events of the Red War. His most notable rivals are the Praxic Order, who he's been at odds with ever since.

Brayden also has a passion for cooking and baking, even taking lessons from Tyra Karn. Although he does admit he's not very good at it, it does help him relieve stress.

Brayden is renown for bombarding his enemies with vicious Solar and Arc Damage and wielding heavy munitions. The more he gets hurt, the harder he tends to fight.