"Turn your eye inward, upon your ideal self. "
— Weapon description

Burning Eye is a Legendary Scout Rifle first made obtainable in Destiny Year 3. It can be obtained by either achieving Gold Tier in the Trials of Osiris, or going flawless (9-0) and receiving the adept version of it from the crate in the Lighthouse on Mercury. The adept version of this weapon, as with all adept weapons, has the intrinsic perk Snapshot, which allows the wielder to aim down the sights quicker.

The Burning Eye is a powerful scout rifle earned through participation in the trials of Osiris. 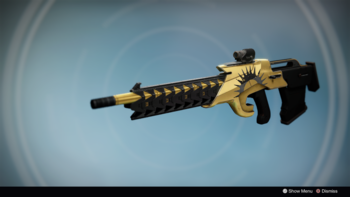 Adept version of the weapon.