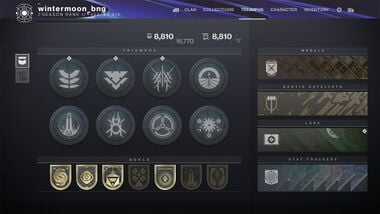 Triumphs is a system introduced in Destiny 2's Forsaken expansion, and is used to track progress in-game.

Triumphs are gameplay objectives that are constantly tracked, which when completed can be redeemed for rewards. This usually takes the form of Triumph score, which measures a player's accomplishment in the game. Triumph score is split into Active score and Career score. Active score counts all currently-obtainable Triumphs, while Career score includes Triumphs that can no longer be obtained. Other possible rewards include Lore entries and cosmetic items such as shaders and emblems. There are eight categories of Triumphs, which are as follows.

While unrelated to the Triumphs system, Stat Trackers can be viewed from the Triumphs menu, though not equipped.

Titles are cosmetic text displayed below a player's name. They are tied to seals, which are a collection of Triumphs that represent the pinnacle of achievement in a given activity, season, or Destination. Players who complete a seal in a given timeframe, usually until the end of the season it was introduced in, are eligible to purchase a physical version of the seal as part of the Bungie Rewards program.

In Season of the Chosen, it was made possible to "gild" certain activity-related titles that a player has already earned. This is done by completing a number of additional Triumphs and turns the title yellow for the rest of the season, alongside adding a permanent symbol that denotes how many times the title has been gilded. This can be done once per season on a given title.

These titles are always obtainable and can be gilded.

These titles cannot be gilded but are currently obtainable.

Titles for events, while gildable, work differently to the others. Tied to the event card challenges, they can be acquired whenever that event occurs, but gilding and any incomplete progress are reset after one year during the next run of the event. Completing challenges across the events, even in multiple runs, grants progress towards the Reveler title which also resets annually.

These titles can no longer be obtained, but can still be equipped.