"They're known as the Blood Guard for a reason. I'd tell you to be careful, but...that didn't help the last team I sent out."
— Suraya Hawthorne

The Blood Guard is an elite unit of the Red Legion. Described as Dominus Ghaul's "chosen" and would die for their leader,[1] they often serve as commanders of operations throughout the Red War and can also be found serving as bodyguards to high-ranking Cabal officers.[2] They can be identified by their heavy, all-red armor, which often features prominent horsehair-like crests.

The Blood Guard has members filling the roles of Legionnaires, Incendiors, and Centurions who are frequently seen serving as an Honor Guard centered around Red Legion Hardpoints, VIPs, or points of interest. It is heavily inferred Blood Guard are also enforcers amongst the Red Legion to help carry out the will of the Dominus or acting Red Legion leader along with serving as a royal guard and field operatives.

Possessing a doctrine of no retreat, the Blood Guard exhibits usual Cabal dogma and loyalty however elevated in intensity towards those who they serve and the principles and objectives they seek to uphold. The Guard is observed as utterly subservient to their commanders with many openly sacrificing themselves for their higher-ups without hesitation.[3]

Considering the Red Legion's armor scheme with commanders and Ultras wearing Gold, his personal bodyguard along with the Guard's instability after his fall, it can be inferred Thumos, the Unbroken was a commander of the Blood Guard if not its leader.

"The only thing standing between you and the Almighty is Thumos, the Unbroken. He's a Blood Guard. One of Ghaul's "chosen." The Red Legion will die for him."
— Commander Zavala

Stemming from an unknown period in time likely after the Midnight Coup, the Blood Guard are the most elite of the Red Legion's warriors and officers. During the Red War, the Blood Guard were deployed across the system with Keeps primarily emplaced in the European Dead Zone. Acting under their command, The Blood Guard helped in the siege and occupation of The Last City. Many weeks after the preemptive attack, The Guardian would be forced to face the Blood Guard and its command as their only method of infiltrating The Almighty.[4][5]

Assaulting The Tunnels, the Guardian fought through hordes of Cabal Red Legion until eventually reaching the Orobas Vectura, the Cabal Carrier of Thumos. Fighting through lines of Blood Guard Security, the Guardian eventually fought their way into the bridge of the carrier where they faced Thumos along with two body guards. Despite the skill of the Guard and the Unbroken, the Guardian vanquished them all, obtaining the keycodes to Thumos' ship and using it to infiltrate The Almighty despite an attempt from the Red Legion at defending the Harvester. Blood Guard members faced The Guardian on both the sun-destroying vessel and The Immortal, Ghaul's personal flagship, yet all perished, unable to prevent the Guardian in their advance and vanquishing of Ghaul in the reclaimation of the Last City.

Blood Guard would also be seen during the attack on The Inverted Spire where they attempted to protect the various drills, but had ultimately failed.[6] 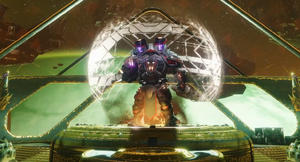 Ca'our, the de-facto leader of the Legion and Guard

" Ghaul is lost. He stood before the Light and met a warrior's end. The Red Legion suffered a great blow today, and in time we shall mourn the Dominus. We do not lay in defeat like the wretched Eliksni. No, I will not return to Torobatl in defeat."
— Val Ca'uor

Forced into disarray at the loss of the Dominus, Consul, and their commander Thumos, the Blood Guard and Red Legion as a whole were disrupted.[7] This did not last for long, however, as in the wake of the power vacuum Val Ca'uor asserted himself as the new de-facto leader of the Red Legion and swiftly put the Blood Guard to new use. In Ca'our's short eight-month reign, the Blood Guard were encountered far more frequently in the field, partaking most notablly in the assault on The Insight Terminus[8]. The Blood Guard would then be deployed to The Leviathan alongside the entirety of Ca'our's amassed Red Legion fleet until his subsequent death where the Blood Guard began to fracture into individual lead cells as their primary purpose for existing had been shattered.[9] The largest example was several Blood Guard defecting to the "Unbowed Legion" of the Cabal Deserters in the form of Uprooted Red Legion, however some remained loyal to the Legion and served Vrag and Tluam.[10]

During the Season of Dawn, several Blood Guard in the form of Time Wardens would assist the Red Legion and Psion Flayer Triumvirate in subverting time to undo their defeat in the Red War. The Blood Guard and the respective Psion sisters, along with the Red Legion, would still fail in their attempts leaving even more Blood Guard slain.[11] 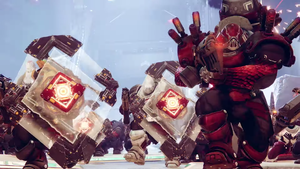 " I send out a challenge to the remains of the broken legion: prove your worth in battle. The ancient rites live again."
— Empress Caiatl

Following the events of the Empress' arrival into the Solar System, the remaining Blood Guard have resurfaced amongst the fields of multiple Battlegrounds acting as field commanders, shieldbearers, and unstable fuel cell holders. Flocking to many of Caiatl's Emissaries, the Blood Guard served many new roles and fought in several Rite of Provings. Many remnant Blood Guard members would turn to the Imperial Cabal and be promoted to Vals, serving within the Halphas Electus with many falling in the Proving Grounds against the Chosen Guardian who sought to triumph over Ignovun, Chosen of Caiatl in a final Rite of combat that would determine the victor in the proposed treaty between the Last City and the Cabal.

Despite the events of the Clash of the Chosen, some Blood Guard still held allegiance to Ghaul and the Legion such as Commander Dracus and Val Ma'rag, two of the few officers remaining, and only served the Empress begrudgingly out of the prospect of material or reputable gain.[12] Others instead would remain fractured with one individual receiving the emissary of Caiatl in Driksys' ring on the Tangled Shore.[13]