Randal, the Vandal is a Fallen Vandal located in the Forgotten Shore that appears as Reaver Vandal. Due to the Vandal's exceptional health, he caught early Destiny players off guard and was then affectionately nicknamed "Randal the Vandal" by the community.

He has since gone onto become the longest running Easter egg within the Destiny series due to his ongoing reemergence.

The humble origins of Randal the Vandal can be traced back to the Destiny Alpha edition of the game where he is first seen idling near the northern cave of the Forgotten Shore alongside his trusted Shank. In the Alpha version, he appeared as a Level 8 "Elder Vandal" with a significantly high health bar in comparison to the other enemies in the area.[1] However he was seen as an afterthought as Guardians were power capped to Level 8 and stronger Level 11 enemies existed in the region and took no incoming damage.[1]

Following the release of the Destiny Beta, the Elder Vandal was replaced with a Level 8 Reaver Vandal. Some Patrol missions led Guardians into vicinity of the Vandal and the cave near him would frequently spawn a chest which attracted players who wanted to farm Glimmer.[2] During that time, the Reaver Vandal was an ordinary enemy with regular health stat.[3] He was defeated with great ease and instead a Level 5 Reaver Captain who appeared in the "Eliminate the Target" Public Event proved to be a tougher challenge and required multiple players working together to defeat the Captain.[4] 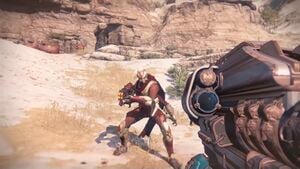 Randal, the Vandal in Destiny 1

With the release of Destiny, the Reaver Vandal continued to patrol the Forgotten Shore. Due to an unknown glitch, the Reaver Vandal had a higher health stat in comparison to its Beta counterpart and began killing many unsuspecting players. His disproportionate stat soon caught the attention of Level 20 players who documented his strength by uploading videos onto YouTube titled "Level 8 Reaver Vandal" and "Randal the Vandal".[5] The Vandal quickly gained infamy among the Destiny community for his notorious ability to withstand damage from the greatest of weapons such as the Gjallarhorn and Vex Mythoclast.[6][7] He was described as a "juggernaut" and a "tank" and regarded to be one of the toughest enemies of Destiny even though he was a Level 8 Vandal.[8][9] Players wondered why the Vandal had the health bar of Valus Ta'aurc, another enemy infamous being a bullet sponge.

Randal reached the status of a memetic Badass within the community and tales of his encounters spread throughout the Internet.[10] Becoming one of the first memes within Destiny, players created meme images of Randal, most notably an image of Randal wielding a Gjallarhorn with two health bars. He was viewed as the true "Kell of Kells" and the actual Kell of the House of Devils among other humorous descriptions. The Shank accompanying him also became a meme and nicknamed "Hank the Shank" and "Frank the Shank".

In 2014, Bungie first acknowledged the presence of Randal the Vandal in their year end update.[11] They quickly responded to the meme by secretly having more powerful Reaver Vandals spawn in other events such as VIP Kill Target. Randal was notably spotted on the moon with the House of Exile where he spawns in the final wave of the Glimmer Extraction Public Event.[12] As more new weapons were released, Randal became a litmus test to see how powerful the weapons were. Randal was even capable of withstanding a high impact attack from the Celestial Nighthawk.[13]

The release of The Taken King expansion saw Randal get nerfed in his stats. This was quickly reverted by Bungie when community outcry denounced the change and Randal returned to his former strength and continued to terrorise the Shore with his mighty presence.

The release of Rise of Iron saw the Devil Splicers gain prominence by augmenting themselves with the ancient Golden Age technology of SIVA.[14] While Randal continued to be a permanent feature of the Forgotten Shore, Bungie secretly paid homage to the easter egg in the Wrath of the Machine Raid.

As players defeated the Vosik, the Archpriest and Siege Engine encounters and traversed into the Server Farm, unsuspecting players were greeted by Rahndel, the Perfected and his trusted Shank, now a Splicer Repeater Shank.[15][16] The Level 42 Vandal quickly proved to be a formidable foe as he was empowered with SIVA and gifted with an unusually high durability and health stat. He was stronger than his original counterpart and it took a whole fireteam to defeat him. News of his reemergence quickly spread and various articles documented the Easter egg.[17] However, the spawn rate for Rahndel was so low that only few have witnessed the glory of the perfect Vandal.[18] Bungie also decided fixed the bug for original Randal the Vandal.[19]

While it is never explained why Randal the Vandal was seen in the Server Farm, one meme commentary stated that Randal was guarding the way for Aksis, Archon Prime as he was tired of his brethren being so weak and wanted Aksis and other Fallen to reach the godly status of Randal, who was already perfect, through the technological enhancement of SIVA.

Prior to the release of Destiny 2, the Old Houses including the House of Devils, abandoned their old loyalties and formed a new House for the sake of survival. As the Red Legion invaded the Last City and began the Red War, the newly formed House of Dusk also emerged from the shadows and quickly spread themselves across the Solar System.

They established a stronghold on the European Dead Zone and clashed with the Red Legion over territory. The Sunken Isles was a major military beachhead for the Cabal and only the bravest of Fallen ventured into their territory to face them head on. An island near the Echion Vae featured one Reaver Vandal who along with his trusted Shank started killing many unsuspecting Cabal with his Wire Rifle. The Vandal also guarded a regional chest nearby and killed many players who attempted to collect its loot or partake in the Public Event near him. As players retaliated against the Vandal, they soon found trouble defeating him as he was incredibly durable. Randal the Vandal had returned with the House of Dusk. Draped in the silver and purple colours of Saint-14, the greatest Fallen warrior sought to claim the territory from the Cabal with his presence alone.

Bungie had yet again paid homage to the original Randal. News of his reemergence quickly spread as many articles documented the Easter egg. In some instances Randal would spawn a with Shock Rifle and his gameplay became more evasive and proved to be tougher to defeat. Many players used their new super abilities and weapons against him, but Randal still proved to be a challenge and required an intense amount of firepower to defeat.

The Shadowkeep expansion saw a narrative where a Pyramid on the Moon created apparitions of past figures and enemies to exploit the trauma of Guardians as psychological warfare. These figures appeared as Nightmares and notable examples include Skolas and Taniks, but the Pyramid also exploited the Guardians greatest nightmare.

A cave in Sorrow's Harbor would occasionally manifest a rare nightmare named Nightmare Reaver Vandal. Randal the Vandal, the Fallen boogeyman had returned in nightmare form.

While it is said that the Luna Pyramid created the nightmare of Randal, this however is not accepted by the community as they believe Randal simply wanted to go to sleep and instead created a Nightmare of his own to haunt the Guardians for fun.

A guardian attacking Randal, the Vandal with a sparrow.

Prior to the release of Beyond Light, Bungie had announced plans to vault some of its content to improve the game. With the launch of the expansion the past Destiny 2 iterations of Randal such as the violet and nightmare Vandals were also vaulted to the great disappointment of the community. However, the past nightmares were just a bed time story, as Bungie announced the return of real Randal the Vandal with the return of the Cosmodrome.

Randal being defeated by a guardian riding a sparrow.

With the rediscovery of the legendary Loot Cave came the joyful news of Randal the Vandal being found within its depths, tormenting both ambitious Guardians as well as the Hive. According to the messages left behind by Wilhelm-7, Randal had lured his fireteam into the cave. There he would also be spotted several times throughout the Grasp of Avarice dungeon, dropping fake Engrams (which could then be used to open loot chests to acquire the Gjallarhorn Catalyst) upon being harmed. He was, however, unable to be killed, vanishing when his health dropped critically low.