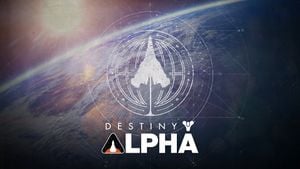 The Destiny Alpha was a closed Destiny alpha test, accessed by signing up on the PlayStation website after E3 2014. The alpha was playable between June 12 and June 15, 2014 for PlayStation 4 and PlayStation 3 platforms only.[1]