"So shall we find a new purpose, not by the lies of the First Navigator, the Trickster Queen or the Warrior God, we must weave our own lie."

The Abhorrent Brood is an aspiring Hive Sect, distinguishable by their similar color scheme, armor and weaponry to the servants of the Witch Queen. Their goal of spreading a godless influence coincides with the fact that they worship no god as they see the Hive gods as parasites and wish to purge themselves from being their tools of metamorphosis.

Before the events of Shadowkeep but after the Red War, a group of Cult Wizards stumbled upon the broken broods of the Hive within the Cosmodrome, more specifically those who crept within the Grottos. While they weren't official leaders, they began to plan and float the idea of creating a new army to conquer Earth and claim it for themselves rather than the gods that the Hive once worshipped. This idea would be the foundation in which the Abhorrent Brood would grow and swell in numbers while the Cosmodrome would still be within its quarantined state 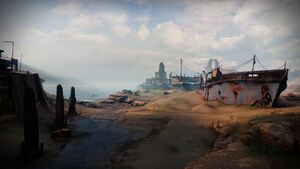 The Forgotten Shore, below lies the Abhorrent breeding grounds

Sometime following the events of Forsaken, the Abhorrent Brood came across a forgotten sector of the Cosmodrome which had been infested by dozens of Seeder Ships. While investigating one of these said ships they had unexpectedly awoken the twin Blackborne Knights, Yunaith and Ketrox. While the brood chose to praise and worship them, they however had different plans and had slaughtered all those that stood before them, nicknaming it the Blackborne Slaughter.