"For Ghosts who rise when it's needed most."
— Ghost shell description 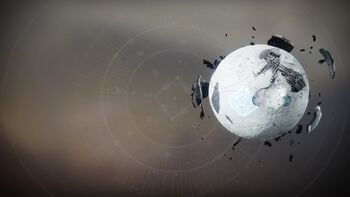 Awakened Shell is an Exotic Ghost shell introduced in Season of Arrivals. It was awarded for completing the Moments of Triumph 2020 seal.[1]

FOR GHOSTS WHO RISE WHEN IT'S NEEDED MOST.

"Some Fallen mistrust my interest in human artifacts. They find it distasteful. Or they think it makes me a sympathizer," the Spider chuckles fulsomely. "As if I could experience sympathy."

The Fallen mob boss holds a mint-condition Ghost shell before his right two eyes. The shell looks fragile in his enormous spindly fingers.

"In truth, I like to see their emptiness. The absence where the Light once was. Like the scent of an empty perfume bottle." He turns his attention to the Hunter standing before him. "Of course, once I sell it to you, it'll just be filled with Light again. Yammering away. Using your vulgar desire for power to fulfill its true purpose."

The Hunter's trigger finger begins to twitch with impatience. "Well, if you want to keep it, I'll be happy to put your bounty back in the wind." He toe-pokes the prone form lying on the ground before him. A muffled snarl emerges from behind the bag over its head.

"Everyone remain calm," the Hunter's Ghost pipes in. "I need a new shell, and you… need this prisoner. This is an equitable situation. We agreed."

"See? It's obvious who works for who here." The Spider tosses the Ghost shell to the Hunter. "Fine. Take it. Just remember: One day, you may outlive your usefulness and that little Ghost will drop you for another walking corpse. And when that happens, I'll be waiting."