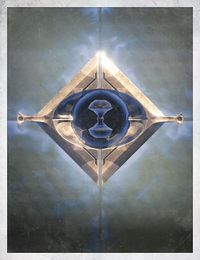 The Aegis is a shield used within the Vault of Glass[1] and The Nexus: Revisited Strike. The Aegis was created by Kabr, the Legionless

The Aegis was created by Kabr, after his fireteam was erased from existence by the Templar. Kabr sacrificed his own light to create a weapon that could change fate and stop the Templar and its Oracles.[3] It was later used during the Age of Triumph when Guardians defeated an augmented, Taken Sekrion by using the Aegis to take down its shields.

"I have destroyed myself to do this. They have taken my Ghost. They are in my blood and brain. But now there is hope.
"I have made a wound in the Vault. I have pierced it and let in the Light. Bathe in it, and be cleansed. Look to it, and understand:
"From my own Light and from the thinking flesh of the Vex I made a shield. The shield is your deliverance. It will break the unbreakable. It will change your fate.
"Bind yourself to the shield. Bind yourself to me. And if you abandon your purpose, let the Vault consume you, as it consumed me.
"Now it is done. If I speak again, I am not Kabr." [4]

The main attack is a melee strike, which is fairly effective against most units. Using the grenade button activated the shield, which removes the "Mark of Negation" debuff. This has a cooldown, however, so time wisely. Lastly, the Super attack fires an energy blast, and its main purpose is to bring down the Templar's shield. This Super is charged by killing the Harpies the Templar and Atheon summons to defend themselves.

The Aegis is used in three different encounters: The Templar, The Gatekeeper, and Atheon. In the Templar encounter, The Aegis is used to destroy The Templar's Shield, allowing for the boss to be damaged. In The Gatekeeper encounter, The Aegis must be collected from the past, present, and future and all brought together into the present to defend the conflux. During the Atheon The Aegis is used to protect timewarped Guardians against the effects of time travel and oncoming attacks from Harpies in the present. The Super is also an effective attack against Atheon. If the Aegis is not picked up within five seconds it will wipe the entire fireteam with the "Curse of the Aegis".