Armor of the Great Hunt (Hunter)

Armor of the Great Hunt is an Legendary Hunter armor set that can be acquired from the Last Wish Raid.

Mask of the Great Hunt[edit] 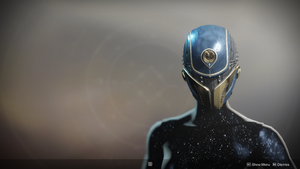 "I wish to be cunning."
— Armor description

The Ahamkara remain an issue. There's still so much we can learn from them but what they've done to Venus… no two Guardians see the same thing. Consultants from the War Cult have been brought in to gauge disagreements over timelines of events. One of our Warlocks stared into the paracausal phenomenon that formed over the Ishtar Academy and shot himself. (He is NOT an authorized Thanatonaut). Luckily, his Ghost hid from him beforehand. We managed to get him back. He has no lingering physical wounds, but he will need time to recover.

We thought we were gods who had found an opportunity for more power. A silly notion to the likes of you and me, but the average Guardian has not been threatened like this. The Titans are beside themselves.

We will take extreme measures. We must. But these creatures have such means… They will flee. Far and wide. Perhaps all the way to you.

Mara, I implore you. If you hold your people as dearly as you say you do, you will end them on sight.

Grips of the Great Hunt[edit] 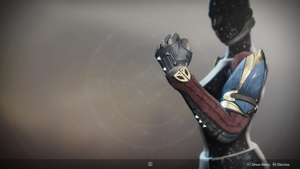 "I wish to be precise."
— Armor description

Venus. A year into the Great Hunt.

Eris and Zavala watched as Shaxx sat with the dying Ahamkara, a hand on its snout.

"Is he gloating?" she asked.

"I think he is too pragmatic to gloat." Zavala said.

The Ahamkara twitched, its eyes rolled up into its head. The biochemical glow just beneath its skin grew harsh. Zavala and Eris raised their hands against the increasing glare.

Then the corpse exploded. Dirt showered the Guardians like dusty rain on a clear day.

Shaxx sat silently in the resulting crater, covered in a sheet of green fire.

Zavala and Eris opened their mouths to speak, but Shaxx interrupted them.

"Shh," he said, as the flame quietly roared.

They could all hear a disembodied whisper. But they were used to that by now.

Vest of the Great Hunt[edit] 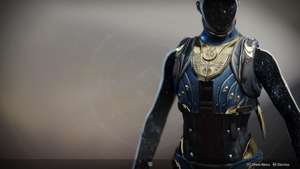 "I wish to be daring."
— Armor description

The Ahamkara refused to die. For a day, Wei-Ning had been fighting it to a standstill with her bare hands, cratering it repeatedly into the ground. Eris had seen wish-dragons drive Titans mad by refusing to fall to brute strength. But Eris was pretty sure Wei-Ning was already insane.

"Confession time," the Titan said, as she hammered punches into the Ahamkara's tentacled face. "I've been wishing this fight would go on forever."

Eris balked. "Please stop, you psychopath. We have six others to handle!"

An hour later, six shapes emerged from the Venusian foliage. Ahamkara. Their compatriot, whom Wei-Ning continued to pound into the ground, was pulsating, growing stronger. Feeding. The others had come to feast at the same table.

Eris pulled her Arc Blade from the air and Blinked.

When the Hunter and the Titan finished their hunt, Eris thought she heard Wei-Ning whisper.

"Did you say something?"

Strides of the Great Hunt[edit] 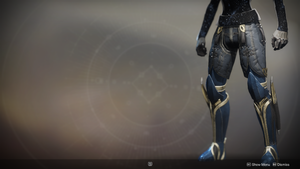 "I wish to be swift."
— Armor description

Eris and Ikora stood over a graveyard of whispering bones.

An hour ago, this was a vibrant army of Ahamkara.

"What did they offer you?" said Eris. Her stare reached for a mile in front of them. So did the grave of bones.

"The same as you, I'm sure," Ikora stood buoyed by a gentle flow of Light, above the whispering bones. It was easier to concentrate up here.

"Everything they say is true," said Eris.

Ikora looked down at her sharply. "Sentiment like that leads to morbid places," she cautioned.

"If you guide your Light north, I'll take the south. This will be quick—"

"I think they showed me my life before my Ghost."

Together, the Guardians summoned a storm of Light that consumed the bones around them. They ignored the whispers, but the voices grew louder, harsher as the maelstrom progressed. Soon, they couldn't tell the difference between the whispers and the storm.

Cloak of the Great Hunt[edit] 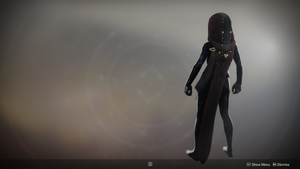 "I wish to be renowned."
— Armor description

Years after the Hunt.

Guardians live lives of loss. Everything around us inevitably turns to dust. When we come together, it's to war. Against enemies of humanity. Against each other.

One of our few comforts is the knowledge that our peers will be there tomorrow. For good or ill. My fireteam has been robbed of that.

I am lost in these lunar tunnels. Out of ammo. Short on Light. I am out of moves, save one. I clutch an Ahamkara bone in one hand, and my dead Ghost in the other. I hear a whisper.

My vision is gone. My face itches from the viscous flow from my eyes.

Though I can't see, I find that I suddenly know the way out.