Adieu, also known as Exodus, is the second story mission of Destiny 2. After the Red Legion invaded the Last City, and cut off the light from the rest of the Guardians by the order of Dominus Ghaul, the Guardian evacuates the devastated city and leaves with a group of survivors lead by Suraya Hawthorne. They then are relocated to The Farm, located deep within the European Dead Zone.

Cutscene - Vision from the Shard of the Traveler
[edit]

The spirit of a bird flying through clouds. The clouds part, showing the Traveler over Echo Mesa, Io, the last place the Traveler touched before the Collapse.

The spirit dives into a river of time flowing out from the location. Inside a thousand faces screaming, drowning, desperately struggling to stay alive. Doomed. The foreboding shadow of the "Pyramid Ships" in formation above the water.

Suddenly they fall into the abyss, vanquished, as the scene shifts yet again to a brief vision of The Leviathan, crowned with a pair of suns, devouring a planetoid, possibly Nessus.

A spear of arc. A sword of flame. And a shield of the void. Powers of the Light. The spirit soaring past it all, breaking from lucidity to lucidity as with sudden focus we find ourselves above the sea of time, looking towards a distant shore and the Shard of the Traveler. The music soars on the wings of the spirit, the sun shines.

Two days after the attack: the Guardian wakes in a crater after having been thrown off The Immortal. The City is destroyed. Everything is grey with smoke. In the distance Cabal soldiers patrol, flanked by Goliath Tanks. The Guardian gets up out of the crater, badly wounded, unable to heal or be revived, and stumbles forward aimlessly, trying to find a way out. The player follows along a drain, ducking behind a crashed ship as a Thresher passes slowly overhead, searching for survivors. On the boulevard where the Cabal and their tanks are marching through the City, Thumos the Unbroken can be seen briefly as he marches behind the troops in his distinctive golden armor and wings.

The player moves towards the sound of their Ghost.

The exertion has been too much and the Guardian collapses, unable to continue.

Ghost notices the Guardian, rushing up to them and healing them.

Able to walk again the player gets moving, trying to evacuate the ruined city. The player makes their way over the rubble and through a gap in the Wall towards the world beyond.

Four days after the attack. A falcon sits on a rock, watching the player as they make their way slowly through the mountains. It flies off as they approach. In the distance a group of seven Threshers roar through the skies, their engines booming down the mountain passes. A banner flutters in the breeze. A sign. A beacon. Hope. Other Guardians! Dead... Their camp still smouldering from the attack. Bodies strewn everywhere.

The player searches the camp for anything useful. A radio antenna plays the following message on repeat:

The player finds the Sorrow MG2 and ammunition for their Traveler's Chosen sidearm. Outside the camp the Guardian is ambushed by Cabal War Beasts, introducing the player to this enemy type. Follow your vision. Track the falcon through the mountains. The War Beasts defeated, the player heads off again.

{Twilight Gap} One week after the attack

The player makes their way through the mountain passes. As they move along a precarious ledge, the City comes into view, and as the music hammers home the sadness of this destruction a Cabal warship passes low overhead. The player continues on, gaining a brief view of the lands outside the City's encircling mountains before being confronted by more Cabal and War Beasts. The player defeats these and continues on along more narrow paths, jumping from cliff face to cliff face as they procede until finally seeing the falcon again, sitting on a ledge opposite the player. The Guardian jumps, reaching out, their grip slipping as they fall short and plummet off the cliff, landing unconscious with a thud as the scene fades to black.

The Guardian wakes to find Hawthorne looking down on him as she extends a hand and helps them get back on their feet.

A loud explosive noise is heard, possibly a flare or a warning shot.

The falcon screeches as it flies in, landing on Hawthorne's outstretched arm

The Guardian nods a yes

Hawthorne throws the Guardian a Shotgun, the Stubborn Oak.

Hawthorne turns to the group behind her, gesturing to leave.

The camera turns and zooms out, showing Hawthorne and the Guardian running after her, moving towards a fleet of ships preparing to take off.

Dominus Ghaul stares through the window at the Traveler, caged, where it floats above the City he has conquered.

The Consul enters the scene and approaches Ghaul

The Consul walks up the steps towards Ghaul still staring out the window at the Traveler.

Ghaul looks at The Consul, now besides him.

The Consul steps forward, gesturing emphatically at the Traveler and the partially completed Traveler Cage, shown over the burning City.

Ghaul returns to staring intently at the Traveler

Quietly, as if to himself Ghaul says

The Consul looks at his protegee, concerned that he is getting distracted of his mission

Ghaul looks at his mentor, listening.

Ghaul turns away from the window as an X shaped torture rack, with the Speaker strapped to it, descends from the ceiling. Ghaul approaches the Speaker, face to face, staring at him.

The squadron of spacecraft seen earlier is in center view as they fly in to The Farm, the Shard of the Traveler and the European Dead Zone is visible in the background as the camera shifts to follow them.

The Guardian transmats into the Farm as the camera swings around slowly panning out to show the new location, before focusing with the distant Shard fixed in the center of the scene. 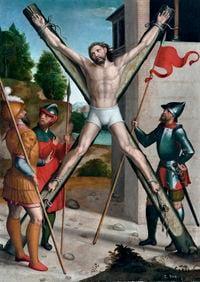 A painting by Juan Correa de Vivar (1510-1566) depicting the death of St. Andrew on a diagonal X shaped cross.

The Speaker crucified on an X shaped rack reminiscent of the St. Andrew's Cross.