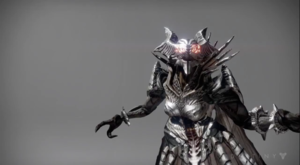 As I watched the Alpha playthroughs, I think it will be better to replace 'Trooper' to 'Acolyte'. —This unsigned comment was made by The primodial (talk • contribs). Please sign your posts with ~~~~!

Do the Hive have an 'alphabet'?[edit]

The runes used on both the Temple of Crota door locks and the locked door leading further into the Hellmouth during the Summoning Pits are the same. However, during Chamber of Night there are plenty more runes on the object your Ghost scans after the boss battle with Telthor, Unborn. Aside from those two instances I've yet to see more examples, but it's totally possible I've overlooked something somewhere. Is there any semblance of an 'alphabet' or symbol guide yet? Veritas 02:47, 29 September 2014 (EDT)

The Destruction of the Solar System Hive[edit]

So with Oryx, the Taken King assassinated, does this mean all of the Sol System's Hive will all be consumed by the Worms and be destroyed? Titan66 (talk) 15:16, 09 December 2015 (EDT)

I have heard in some lore or someone from Bungie that there is another Hive logic besides the Sword Logic called the Killing Logic, I heard that it is capable of making Ascendent Hive what ever they kill superior to them. Is that true, and if it is, is there more to it than that?--CNBA3 (talk) 13:05, 6 March 2016 (EST)

-Thehouseofwinter: The sword logic is the equivalent of the killing logic as it is the defining law of Oryx and possibly Crota's ascendant realm. It's base is this. When you kill, you are made stronger as you are proving your strength and determination to exist. It was utilized by Vex to co opt the power of the hive ascendant realm during the Attack on Oryx.

It's a subversion of the overall Sword-Logic, as TheHouseofWinter has said.

The Hive have a ranking system?[edit]

Where does it say that Hive have lieutenants or generals? They have regular Hive and Ascendant Hive, they have no ranking system. Titan66 (talk) 14:13, 29 November 2016 (EDT)

It's not so much a rank as it is a description of what they do. Here's the definition of a lieutenant:

Thus, the Hive leadership have lieutenants. Plus, the Taken in World Events are called lieutenants.

What he said. @Titan: Instead of continuously undoing the edit come to the talk page first and ask for the reason.--Spartacus Talk • Contribs 14:19, 29 November 2016 (EST)

Dante the Ghost, last time you said the Hive don't have lieutenants or generals only Ascendant Hive? Please clarify so I can understand more about the Hive hierarchy. Titan66 (talk) 14:22, 29 November 2016 (EDT)

In this case the use of the word indicates a substitute or deputy, not addressing something like General Eisenhower.--Spartacus Talk • Contribs 14:28, 29 November 2016 (EST)

Look, I just gave you the definition of lieutenant and why they're called that and yet it is not a ranking system. Want the full definition instead? Here it is: the Hive have no general miliary ranks because they have none; lieutenant is a general description of what they do, not as an actual military rank.

Dante is correct. The word lieutenant is not a rank though it is used in the army as such. It is merely a word denoting a status of leadership within a hierarchy. In the case of the Hive, it simply means someone who acts or leads in the place of another, or for another. Further, the quote from Eris Morn in this Grimoire Card proves our point. if the Hive have no Hierarchy, how can they have "generals"?

Hive and Life and Death[edit]

I heard somewhere iirc, that the Hive are existing either between or outside life and death, I cannot seem to find it though, can someone eithe please tell me where to find it or tell me if I misheard this piece of info.--CNBA3 (talk) 10:09, 19 September 2018 (EDT)