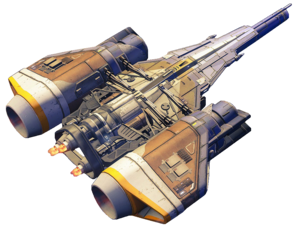 "Arcadians were the most common jumpships during the Golden Age, used for both terrestrial and planetary excursions. Their remains have been reported around most Earth-based space ports."
— Arcadia-class Jumpship

Arcadia is a class of jumpships. It has a flat, triangular-like shape with an elongated front. These were the most commonly used ships during the Golden Age, both for terrestrial and planetary journeys.[1]

During the Red War, the Arcadia jumpships were actively engaging Red Legion Harvesters and Threshers during both the attack on the City and the counter-attack headed by the Vanguard.

Throughout their service with the Guardians, the Arcadia has been seen in the hands of various owners such as Lord Saladin, Commander Zavala, Cayde-6, and Ikora Rey, all with their own personal touches. At least one model of the jumpship has been modified by SIVA.

Arcadian ships are a relic of the Golden Age. Their hulls and baseline tech have been salvaged for scrap for decades. With the right modifications, any ship capable of reaching post-atmospheric standards is worth repairing, and for many, the Arcadia ships often offer a Guardian their chance to step into the black.