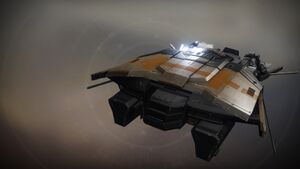 Vimana is a class of jumpships. It has a rectangular, bulky shape, and a heavily armored hull.

Two popular types of Vimana are the IS and CER. The class has been either introduced or favored by Häkke, as many of the jumpships have been refitted by the foundry - often for various City festivities. They are preferred by many civilian workers, like scrappers and satcomm technicians, and sometimes serve as civilian transport during holidays.