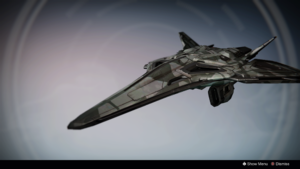 "Base model long range jumpship. Phaetons are sturdy and reliable, though the basic class models are rebuilt below spec, due to limited supplies and high demand. "
— Phaeton Class v1.1

Phaeton is a class of jumpships. It is flat and arrow-shaped, with outspread wings and a long nose.

Two popular subtypes of Phaetons are AF Octavian and LR Javelin. New Monarchy seems to prefer this class of ships, as the faction-themed jumpships rewarded from Executor Hideo in Destiny are all Phaetons.

A sturdy, reliable craft, combining speed and power to great effect. The class's level performance has made it a favourite among Titans who value stable, rugged durability. Originally built as a warfighter during the Golden Age, the Phaeton, as with all crafts, is now more of an exploratory vessel, refurbished from found materials to allow for interplanetary travel.