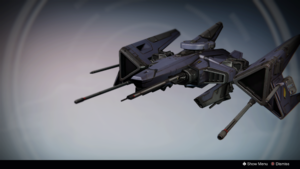 "Base model "near-star" jumpship. The Regulus was originally built for speed and maneuverability, but the basic class models rely on limited resources and rarely reach full spec. "
— Regulus Class 22a

Regulus is a class of jumpships. It has characteristic angular engines and several elongated antennae attached to the front. These ships were built to be speedy and nimble, used mostly for short travels.

Two popular variants of Regulus ships are Cloud Errant and High Water. The subtypes are often marked by a double number and letter(s), like 22a, 77 or NS44. Future War Cult seems to prefer this class of ships, as the faction-themed jumpships rewarded from Lakshmi-2 in Destiny are all Reguluses.

The Regulus Class ship is designed for quick bursts of speed and maximum manoeuvrability. Their agility makes them a favourite of Hunters looking to explore beyond the boundaries of Earth. As with all vessels, the tech to outfit a given Regulus Class ship varies.