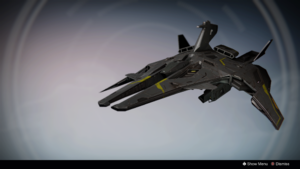 "Base model experimental jumpship. The Kestrel is thought to have been a prototype long-range craft designed near the end of the Golden Age. Most in service are rebuilt using reverse-engineered specs."
— Kestrel Class AX0

Kestrel is a class of jumpships. Its hull is triangular, with two long "noses" at the front and wings bending downwards. The ships are thought to be late-Golden Age prototype crafts built for long-range travels.

Two popular variants of Kestrels are Slipper Misfit and Spindle Demon. The class also has several subtypes of AX, CX and EX ships. Dead Orbit seems to prefer this class of ships, as the faction-themed jumpships rewarded from Arach Jalaal in Destiny are all Kestrels.

Kestral Class ships are engineered for stability and handling, creating an ideal blend of speed, mobility and power. Exact specifications vary as each refurb makes use of available materials, and few ships, if any, have the luxury of being equipped to anything even remotely resembling "factory standards".