"I guess we should get started."
— Nagihiko

Nagihiko (also known as the Honorary Archon of Flame, Bane of Nightmares, and Protector of Innocence) is a Human Warlock working alongside various Fallen houses, including Flame, Lions, and Light, the Vanguard, Cayde's Six, and Fireteams Infernium, Abyssal, and Endgame to defend The Last City against its many enemies and the Darkness.

As the honorary Archon of Koriks's House of Flame, he formed his own group called the "Nightcore Syndicate," a Fallen syndicate consisting of Fallen warriors who share with him a mutual interest in Japanese culture and anime; moreover, while all of these members look up to him, some of the Fallen would secretly proclaim that he and Koriks might be more powerful than the first Kell of Kells, especially due to their mutual passion for anything related to anime.

Some time after the Shadowkeepers Apocalypse began, he joined Fireteams Endgame, Infernium, and Abyssal in a daring campaign to stop Kirito and Asuna, the Shadowkeepers, and the Shadow Army from destroying the entire world with the Darkness.

Although Nagihiko didn't care about his past, all that is known by the Guardians is that he is very good with technology and would even look into countless futures while retaining his perceptions of reality. Furthermore, he's gathered so much intelligence that some of the Guardians would say that he is indeed the first and only Guardian to have uncovered lost secrets about the multiverse within and beyond the Last City.

Meeting the House of Flame

Between the events of The Dark Below and House of Wolves, the Vanguard tasked Fireteam Infernium with finding the House of Flame and establishing an alliance with it and its Kell, Koriks. As they went to Mars, they ran into Nagihiko, who helps them find the House of Flame. Koriks tells them that he's seen the potential in them and that as a coming war rages on, he and his allies would be there to protect the entire universe.

During the Taken War, he traveled to Mars and uncovered the powers of the Stormcaller, along with lores about its origins. Upon receiving it, he takes the fight to Oryx, the Taken King within the heart of the Dreadnaught.

Following the death of Malok, Pride of Oryx, he ventured to the Plaguelands and assisted the House of Flame and his newly-assembled Nightcore Syndicate with hunting down the Devil Splicers in order to protect the legacies of the Iron Lords, while keeping an eye on a particular Guardian, whom he believed might be the one to stop the Darkness.

Nagihiko preparing for a fight

Beginning of the Shadowkeeper Apocalypse

Some time after Zavala's funeral, he met up with Ikora Rey, who tells him that the boy who killed Zavala is Kirito, the legendary Black Swordsman of Aincrad who went rogue alongside Asuna Yuuki and formed a nefarious organization known as the Shadowkeepers and that while stopping them might not bring Zavala back, it might be enough to save the Traveler. He accepts the mission, replying that he would save Mal and avenge Zavala's death, even if it means putting the Shadowkeepers down.

As countless Guardians begin fighting against the Shadowkeepers, he went to The Dark Forest and located the Shard of the Traveler, unlocking his next power, leading him to become a Shadowdancer. Fueled by this power, he, with Koriks's help, began searching for other Guardians like him so that he can help them fight back against Kirito.

"Hi, guys. My name is Nagihiko. I've heard a lot about you guys.
So, you said you wanted to show us something."
— Nagihiko and Ventharok

Meeting the House of Lions

"I'm putting together a team of Guardians gifted with special abilities. See, I believe enemies are coming..."
"Stop right there. I'm in."
“You are?”
"Yeah, I... I need... friends. Expect for my friends from the other Fireteams, people are difficult, they require a lot of focus. They, uh... they have a rhythm that I haven't quite been able to - like brunch! What is brunch? You wait in line for an hour for, essentially, lunch. I mean... I don't know. People are... a little slow."
"We'll try to keep up."
"Can I keep this?"
— Joskaa, Lion Kell, Nagihiko, Brayden, and Vothriks, the Lost

Wrath of the Relentless

Season of the Black Swordsman

A very skilled and strong-willed protector, Nagihiko never hesitates to fight waves of enemies to protect those he care about.

Whenever he fights, although he can deal brutal damage against the enemies of the Light by punching, he always carries with him weapons of various different types and dimensions. However, the gears he brings with him that are capable of doing even more damage against the minions of the Darkness than most gears are the ones either forged from various dimensions or created in the future. 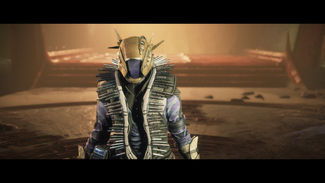