The Mausoleum is a location within the Dreadnaught orbiting Saturn.

Facing away from the Cabal warship and towards the chasm, on the far left corner there is a platform with a locked chest. Unlike the other locked chests, this chest doesn't require a key. To open, the player has to enter a small cave inside a room on the left wall. The player has to stand in this room until they acquire the "scent of the worm" buff. The player then has one minute to open the chest before the scent wears off. This requires jumping across invisible platforms, which can only be reached first by going across the Mausoleum. Once the player reaches the platform, they have to avoid the blind Thralls and open the chest. Inside is an Engram, a Rune, and a Calcified Fragment. 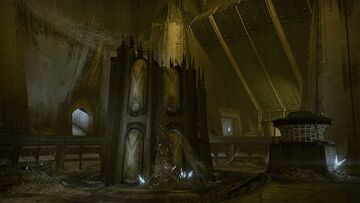 There is a hidden room on the warship, near the entrance to the warship interior. To reach this room, one has to jump up from nearby debris. Inside this room is a locked doorway, behind which is a chest. To unlock this door, the player first needs to acquire the Skyburners key by killing Cabal. Then the player needs to head over to the Hull Breach. Inside the warship doorway to the left is a command console; insert the key into the console to summon Cabal reinforcements. One of these enemies is the Cabal champion, Valus Tau'ugh. Kill the champion and he will drop a Beacon. Return to the room in the Mausoleum and use the beacon on the console found within. Cayde-6 will tell the player to help clear up a signal, first by killing enemies, then by running back to the Hull Breach and stand in the same room where the player summoned the champion. Lastly, the player needs to run back to the Mausoleum, go to The Founts, drop down into the prison and kill the marked Cabal commanders before time runs out. The player will now have the key to open the locked door and access the chest, which will have an Engram, a Rune, and a Calcified Fragment.